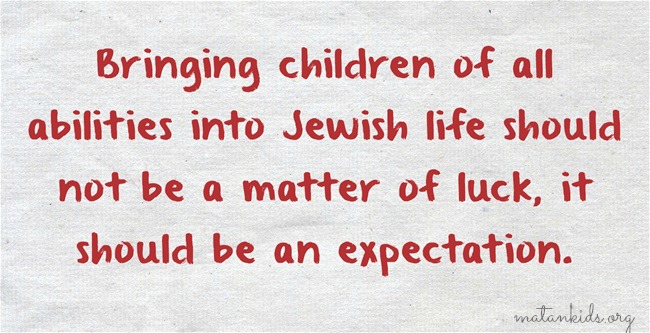 Since our son and brother Jeff Plevan died nearly two years ago, we have often reflected on how much his connection to Jewish life meant to him as a child and adult with learning disabilities. He majored in Jewish studies in college, received a master’s degree in Jewish communal service at Gratz College near Philadelphia, worked for Jewish organizations and was involved in Jewish religious life as an adult. He died suddenly of a heart attack on his way to a Gratz College alumni event to celebrate his and others’ service to Jewish life.

For Jeff, learning always came with struggle. As his parents, we agonized over the choices we made for his education knowing how significant they were because of the challenges he faced. Jeff’s journey through Jewish education as a child was for the most part a success story. We were blessed to be part of synagogue with professionals who were willing to include Jeff and provide extra attention. At the same time, it was not always easy, and when we look back at even some of the successes, we realize how lucky we were and he was.

Jeff’s connection to the synagogue experience began at an early age. When he was 3 or 4 years old, Jeff was captivated by the visual trappings of the Torah service and would play out the service at home using a plush toy Torah he had acquired at a Simchat Torah service at the synagogue. Like his older brother, Jeff attended his first year of nursery school at the Central Synagogue nursery school at age 2 ½. Early in that year we were aware that Jeff had speech and language delays from reports from the teachers and staff of the school. However, we were stunned and disappointed when at the end of that year we were told that Jeff would have to leave the nursery school and should attend a special needs nursery program. In retrospect, we understand that the school could not handle Jeff’s unique needs, but at the same time we wish that the teachers and staff could have handled our needs as parents by giving us better information as the year progressed and counseling us about the road ahead for him, educationally and Jewishly.

When Jeff arrived at the typical age for the synagogue’s religious school program, we wondered whether this was even possible for him. On our own, we decided to hold him back a year, so he would be with children a year younger, and since he was in a school without grade levels, he would not notice the difference. As luck would have it, his first grade religious school teacher worked as a special needs teacher and was prepared to deal with his learning differences. We were probably lucky that this synagogue did not begin Hebrew instruction until fourth grade, at which point we were able to hire that same teacher to tutor Jeff in Hebrew. We were fortunate too, and blessed, that our marvelous Cantor at the time, Richard Botton, had a background in special education and could work with Jeff without needing any orientation.

Being a large urban synagogue, Central Synagogue typically scheduled two b’nei mitzvah each Shabbat. We made a special request that Jeff have his bar mitzvah alone, to avoid the feeling of being compared to a typical student. The synagogue accommodated our request, but would this have happened had we not spoken up and asked?

As a teen, Jeff actively participated in synagogue life through confirmation class, synagogue youth group and NFTY regional retreats. Jeff’s synagogue youth community embraced him with all his differences, giving him a peer group outside of his special education environment, helping him to build the confidence to navigate social life as an adult. All along, his teachers, youth advisors and clergy looked out for him, knowing that he might need special attention and support along the way.

We now look back and wonder if we were simply lucky that Jeff had such a great Jewish experience. It’s not true for every child with special needs. But we also look back and see that the Jewish world was fortunate to have Jeff, with his enthusiasm, passion and commitment for Jewish life. Nevertheless, bringing a child such as Jeff into Jewish life should not be a matter of luck, it should be an expectation.

This post was written in loving memory of Jeffrey Plevan z”l by his brother and parents. Jeffrey B. Plevan z”l was a consummate Jewish professional remembered for his positive spirit & infectious personality. Diagnosed at an early age with severe delayed speech and language processing difficulties, he possessed an inner drive to overcome life’s obstacles. Jeff’s life embodied the fulfillment of Reb Zusya’s challenge – Jeff lived his life fully, reaching, indeed exceeding, his potential. May his memory be an inspiration for all who knew him, and for those for whom Judaism can help lead to a life worth living. Click here to read more about Jeffrey.