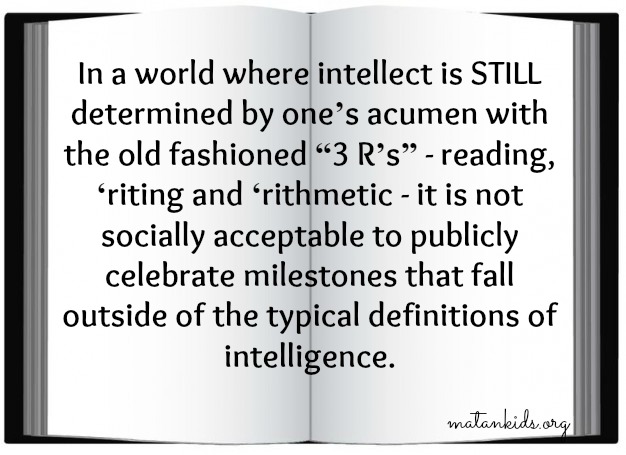 I am such a proud mother. My kids are simply fantastic and I love them to the moon and back. They continually surprise and amaze me; every day I learn something new from them. I’m pleased to share that my older son has learned how to read. I get weepy when I hear him reading street signs and marquees out loud. My younger son is now speaking all of the time, and in ways that I can actually understand him. A few months ago, I was convinced that neither of these milestones would ever be reached.

My boys are 8 and 4.5 years old, both on the autism spectrum – one high functioning, the other severe – yet both struggle significantly with our culture’s narrow definition of intelligence and success. My children’s most recent successes are ver 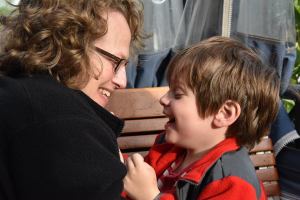 y big milestones, which deserve celebration. However, according to all of the “books” and “rules”, the age at which my children reached these significant milestones is considered to be very much delayed.

In a world where intellect is STILL determined by one’s acumen with the old fashioned “3 R’s” – reading, ‘riting and ‘rithmetic – it is not socially acceptable to publicly celebrate milestones that fall outside of the typical definitions of intelligence.

As we are currently approaching the end of the academic year, social media has recently been filled with pictures of children’s report cards, honor roll certificates, award ceremonies, sports achievements and more. It brings me joy to see my Facebook friends post their children’s accomplishments; however, with our culture’s narrow definition of intelligence and success, these public celebrations are excluding many exceptional people whose talents lie outside the scope of what our culture defines as normal. Why aren’t we celebrating the child who exceeds in the visual-spatial realm who is a master at Lego and Minecraft? What about the child who shows exceptional compassion and empathy and who helped another classmate through a bad experience? Research has proven that there are so many ways to display intelligence, and yet our culture STILL only honors and truly celebrates the small segment of the population who exceed in reading and writing.

Please do not misconstrue my message. Reading and writing are very important life skills that children must master to be productive members of society; however, how and when these tasks are achieved should not be the sole measure by which they are judged. The age at which one achieves these skills shouldn’t be the only determinant of one’s intelligence and success. Rather, the measurement tools should include an appreciation that the skills ARE mastered, regardless of age and stage. Let’s turn the equation around and celebrate people’s abilities, rather than judging people on what they are not able to do.

As a parent with two special needs kids, receiving reports cards is one of the most distressing times of the year. These formal documents in no way celebrate nor honor my children’s successes. In fact, they only highlight the areas in which the school system deems them deficient. It doesn’t honor their innate talents, as these do not comply with the format of an academic report card. Neither do they celebrate my children’s many successes, as these achievements did not occur in the manner and time frame that the school system defines as normal.

While “the system” is much more accommodating of children who learn differently than it was even 5 years ago, it is far from perfect and there is still a long way to go. Let’s challenge ourselves to change the way the world understands learning differences by highlighting and sharing successes, no matter what they are or when they occur. In so doing, we will celebrate and honor each person’s abilities, slowly changing the way our culture defines intelligence and success. 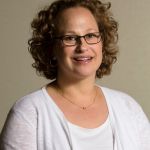 Rachel Kest is the Director of the Jewish Education Services department of the Jewish Federation of Greater Rochester. She holds two Masters Degrees from Brandeis University and is a Wexner Graduate Fellow. Rachel is married to Rabbi Michael Silbert and is the mother of 2 special needs children, Elijah and Nadav.