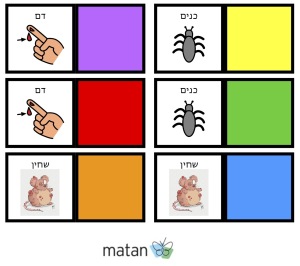 Assembly Directions: Print out these four documents which contain the 10 plague memory cards.  Cut each card out making sure that every plague picture is attached to a colored box.  Fold the plague picture and glue it to the attached colored box.  If done correctly you will end up with 20 bingo cards where one side has a picture of a plague and the other side has a solid color.  Laminate your cards and follow the directions below to play the memory game.