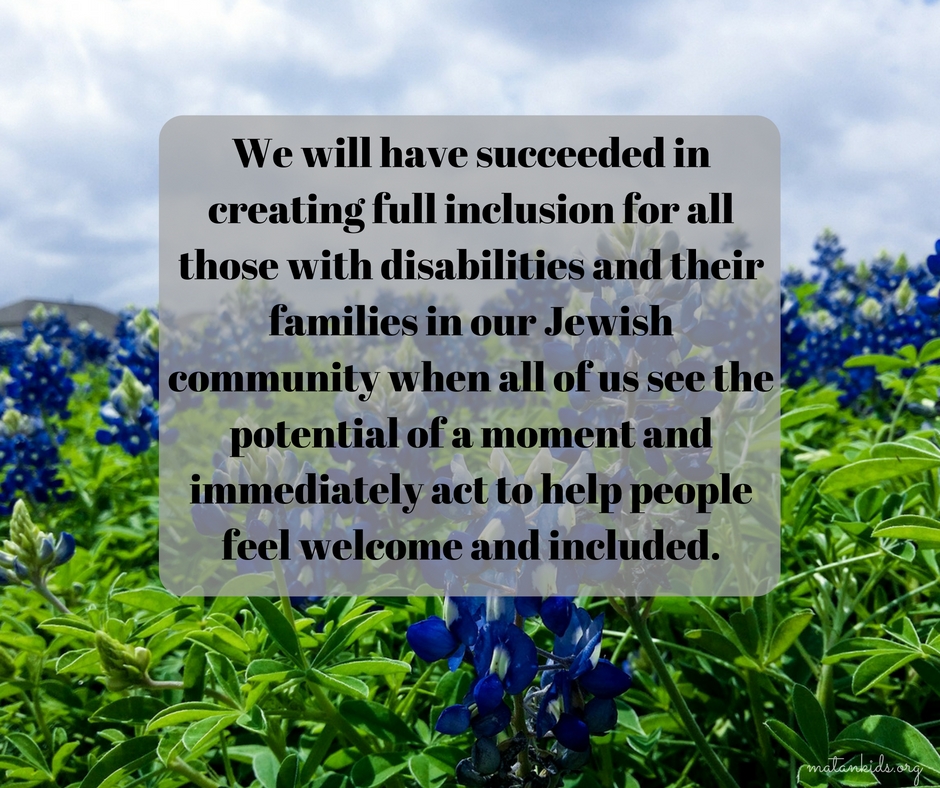 Ten summers ago, we held our first session of Camp Yofi: Family Camp for Jewish Families with Children with Autism at Camp Ramah Darom.  Of the many images from our first session in 2006, one still stands out in my mind the most: Haim (a pseudonym) standing next to the Torah. During Shabbat Morning services, Haim was standing outside with his one-on-one chaver or adult pal, his face plastered to the window of the camp synagogue. As soon as we let him in, Haim went straight up to the Torah reading table. All he wanted to do was be as close to Torah as possible. Because of this habit – wanting to be close to Torah – the synagogue asked Haim’s family to stop bringing him to the shul on Shabbat. Can you imagine this? A family is asked to stop bringing their child to shul because he WANTS to be close to Torah.

Haim stood next to the Torah scroll, watching intently, until the reading ended. When it came time to lift the Torah, Haim moved even closer, staring at the scroll. Haim’s excitement was infectious, causing many adult eyes to well up with tears. Haim wanted to hold the Torah while it was being dressed but lacked the muscle tone necessary for the task.  We placed a chair next to the person holding the scroll and Haim sat down next to him, gazing at the Torah.  Suddenly, a fast thinking staff member came into the room with a fifteen dollar stuffed Torah and put it into Haim’s arms. What started as a trickle turned into a flood of tears from every adult in the room as Haim sat throughout the Haftarah smiling ear to ear, holding Torah as close as possible.

The actions of one fast-thinking staff member reflected a deep understanding of the command of inclusion embodied in the opening verses of Parashat Nitzavim:

“You stand this day, all of you, before the Lord your God -your tribal heads, your elders and your officials, all the people of Israel, your children, your spouse, even the stranger within your camp, from woodchopper to water drawer – to enter into the covenant of the Lord your God, which the Lord your God is concluding with you this day…” Deuteronomy 29:9

Our parashah does not make entering the Covenant like entering into an exclusive club, giving us a list of who is in and who is out. Embracing Torah is not limited to students with 4.0 grade point averages, or who are captains of athletic teams, presidents of school clubs, or are outstanding communicators and social navigators.  No! Everyone is included. Everyone is able to enter into the Covenant.  Everyone is able to be part of the organized synagogue community.  Everyone who wants to should be able to be close to Torah.

In the decade since Ramah Darom established Camp Yofi, the Jewish world has made significant strides in the realm of inclusion. Nonetheless, more work remains before we fully answer Parashat Nitzavim’s cri de coeur for inclusion of Jews with unique needs and disabilities. For any number of reasons, inclusion is still too often met with resistance from our community. Overcoming resistance only requires standing up– being Nitzavim Hayom now, not later – and acting.  Sometimes, creating rapid change simply requires vision, quick action and a fifteen dollar stuffed Torah.

We will have succeeded in creating full inclusion for all those with disabilities, and their families, in our Jewish community:

When every Haim and his or her family feels embraced and actively welcomed and wanted by our community;

When everyone who wants to be close to Torah is seen as a Divine gift and not as a violation of decorum; and

When all of us see the potential of a moment and immediately act to help people feel welcome and included.

Then, and only then, will we know that we have truly answered the call of Parashat Nitzavim: to make the Covenant, our Torah and our Jewish community truly inclusive of and welcoming to all.

Rabbi Loren Sykes lives in Jerusalem, Israel and is the principal of the URJ NFTY EIE High School in Israel.  He was the founding executive director of Camp Ramah Darom and creator of Camp Yofi: Family Camp for Jewish Families with Children with Autism.