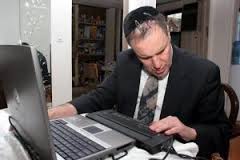 13, 2014. The New Normal is a blog dedicated to issues of inclusion in the Jewish community.

God’s initial revelation to the Israelites at Mount Sinai, when He uttered the Ten Commandments, was accompanied by lightning, thunder and shofar blasts that inspired the soul. The inspiration lasted just forty days.

As described in this week’s Torah portion, the Israelites, fearing that Moses had perished on Mount Sinai, turned to a golden calf to sustain them.

When Moses finally returned, he persuaded God not to destroy the Israelites. Then, after intense supplication, he obtained God’s forgiveness.

As God accepted the Israelites’ repentance, he revealed Himself again, telling Moses,

“The Lord, the Lord, is a compassionate and Gracious Deity, slow to anger and abundant in kindness and truth. He awards kindness unto thousands of generations, forgiving iniquity, willful sin and error, and cleansing.”

God didn’t speak of his omnipotence, omniscience, or miraculous deeds. Rather, He drew attention to His forbearance, kindness and compassion, the attributes which ever since have enabled us to seek His Presence and forgiveness.

How should we who have disabilities “reveal ourselves” to the Jewish community?

Too often, the question never arises, because non-disabled individuals talk on our behalf without any input from us. Read more…