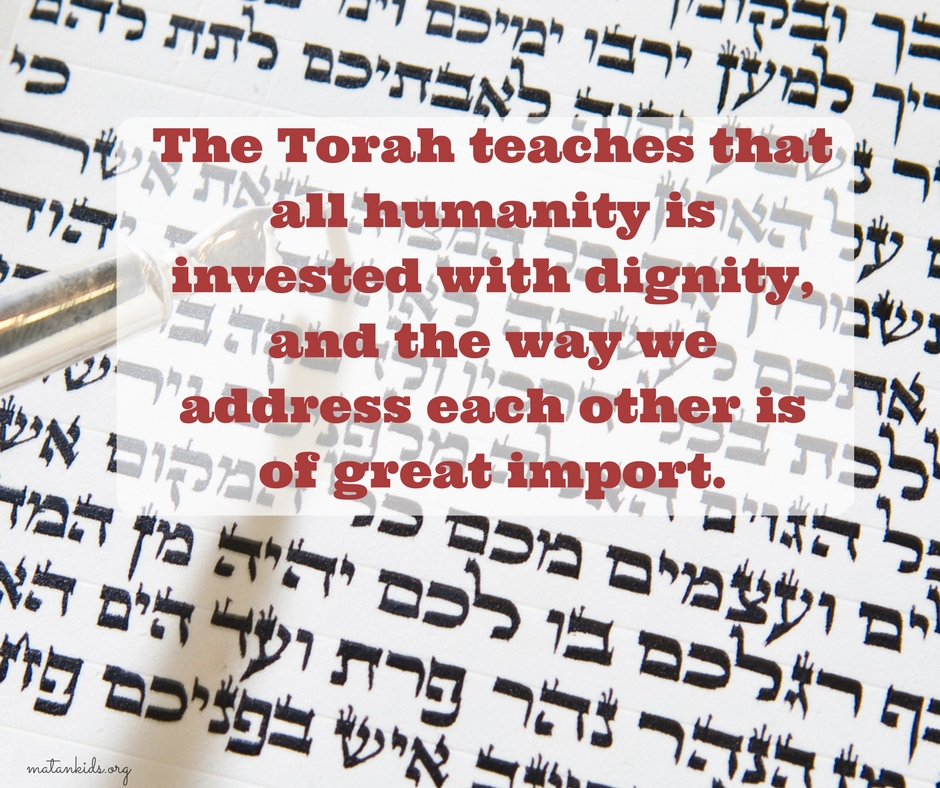 This text teaches us that we are called to deal kindly with all of humanity and certainly not to cause harm to anyone’s physical being, financial welfare, or personal dignity nor to disgrace or diminish the Divine image in our fellow. ~ The Maharal, Yehuda Aryeh Löwe of Prague

As a father of young children, I try to avoid using profanity in our home. Occasionally though–and primarily when I struggle to build IKEA furniture–my frustration gets the better of me, and, to my shame, I’ll issue a course, although satisfying, vulgarity. I should not have been surprised, then, to hear my three-year-old daughter, while playing with a hammer, joyfully repeating a word that might have made a sailor blush.  While my wife assured me that she was saying “shoot,” the incident reminded me of what should be the great take away as we emerge from the High Holy Day season: words matter.

Our culture, though, often presents words as having little consequence. All too often, politicians, musicians, comedians, and other celebrities seek to forward themselves at the expense of others. They assume that their words have little or lasting value.  Our tradition, embodied by the words we return to again this week in Genesis, stands in stark opposition to this world view. The Torah teaches that all humanity is invested with dignity, and the way we address each other is of great import.

Jean Vanier, a French Catholic theologian who has spent his life working with people with developmental disabilities, offered this reflection:

Indeed, all too often, we focus on what we perceive as people’s shortcomings–our outlook is drawn towards the negative.  In his biography of Menachem Mendel Schneersohn, Joseph Telushkin observed that one of the Rebbe’s great strengths was an insistence on optimism; the Rebbe even developed his own lexicon: in Hebrew, for example he preferred not to use the traditional word for hospital, beit cholim (house of illness), using instead beit refuah (house of healing). In English, he never used the word deadline, choosing instead to use the more positive due date. This commitment to language also permeated his philosophy around inclusion. Telushkin notes how, in the 1960s–when people were considerably less sensitive about language, the Lubavitcher Rebbe was asked to speak on the needs of the “the retarded.” He offered the following response:

“I prefer to use some term such as ‘special’ people, not simply as a euphemism, but because it would more accurately reflect their situation, especially in view of the fact that in many cases the [disability] is limited to the capacity to absorb and assimilate knowledge, while in other areas they may be quite normal or even above average.”

The Targum Onkelos, the Aramaic translation of the Bible, has an interesting approach to Genesis 2:7. The text traditionally reads, in part, “and man became a living being.” Onkelos, though, translates the word חַיָּה (chayah – living) as מְמַלְּלָא (m’malah – speaking). And man became a speaking being.  In this reading, it is speech that becomes the essential force of life. It is the key difference that distinguishes humanity and inclines us towards the potential for meaningful and even holy life.

Our society sometimes sends the message that words are disposable.  Texts, tweets, emails, and status updates were not intended to be enduring testaments.  Even in our fast-paced world, though, the impact of words remains profound.  This year, let us strive to affirm and validate the image of God present in humanity by sanctifying through speech.

May the words of my mouth and the meditations of my heart be acceptable before You.

Daniel Stein is the rabbi at Congregation B’nai Shalom in Walnut Creek, California. He previously served as the rabbi of Bnai Abraham Synagogue in Easton, Pennsylvania, and served on the faculty of Lafayette College. He is also a past participant of the Matan Institute. Ordained at the Jewish Theological Seminary, Rabbi Stein also completed a master’s degree in Jewish literature with a concentration in Yiddish there. Daniel is married to Dena Wachtel Stein who is the Alumni Engagement Coordinator at Hebrew Union College-Jewish Institute of Religion. They are the proud parents of Miri and Judah.