This post, written by Leah Hager Cohen, originally ran on April 25, 2014 on Cognoscenti. 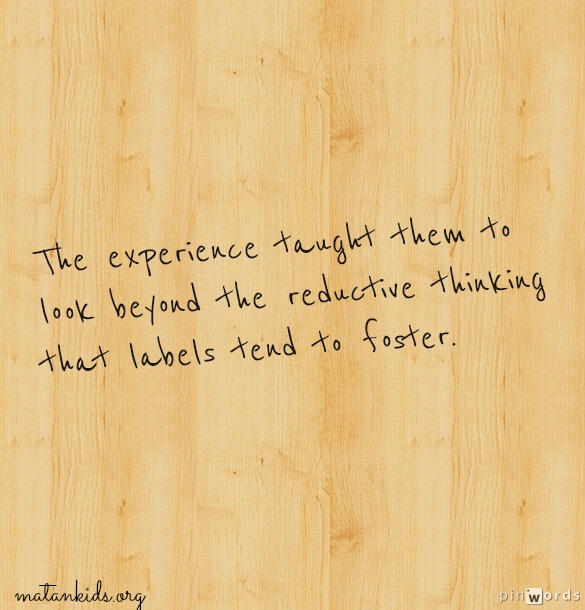 Every school day for five years, I drove to and from the low brick building on a shady residential street where each of my three children, in succession, attended preschool. The May Center’s primary mission was to serve individuals with autism spectrum disorders. My kids weren’t on that spectrum; they were, as I soon learned to call them, “typically developing,” or “typicals.” But one of the preschool classrooms was integrated. That is, a few spots were reserved for kids not on the spectrum. When it came time to send my oldest to preschool, my first choice was The May.

Not that I’d previously known of it. I stumbled across it in the yellow pages; it was close by; I made an appointment. Only when I arrived for the tour did I learn it was a school for the developmentally disabled. I loved it right away — the spacious, cheery classrooms, the warm engagement of the staff. It was clear: no one chose to work there who didn’t feel a strong commitment to helping all kinds of children grow. But the main reason I fell for the place was that it felt familiar, like home.

I, too, had attended an integrated preschool — in my case, the Lexington School for the Deaf. My parents worked there, and we lived on the grounds, so it had seemed natural. As a 3- and 4- and 5-year-old, I’d been one of a minority of hearing kids in a primarily deaf classroom; now my children would be among the few typicals in a group of differently developing peers.

Upon hearing that my kids went to school with autistic classmates, people often looked at me askance. “What is that like?” they’d ask carefully. Meaning: How could you do that to them? I’d try to explain. To grow up among those whom society deems “other,” and to begin that exposure at an early age, before having absorbed and assimilated such distinctions, before having developed the capacity to see the world in terms of “us” and “them” — what greater openness could I wish upon my children?

Our years at The May were pretty blissful. The kids learned about shapes and letters and weather, how to hold scissors and how to share crayons. They sang silly songs, played with soap bubbles and once a year put on a show for the families. When I went to pick them up in the afternoon, I’d often hang out a while and watch them play. Early on, I’d put energy into speculating about which of their classmates were on the spectrum. Sometimes I’d observe my own kids and try to guess how another parents might assess them. Typical? Autistic? I had to shrug. Pretty soon I stopped trying to categorize and sort, and found myself simply noticing the children’s particularities, each by each.

I’ve been thinking a lot about those kids lately, prompted by autism in the news. I read an excerpt of “Life, Animated,” Ron Suskind’s book about his autistic son, Owen. Then I read Andrew Solomon’s New Yorker article on Peter Lanza, whose son Adam killed 26 people at Sandy Hook Elementary School and had an autism spectrum disorder. Suskind and Solomon, reporting with enormous empathy on two vastly different individuals who shared similar diagnoses, help us see beyond the reductive thinking that labels tend to foster. Owen’s and Adam’s stories overlap in certain ways — both boys were difficult for the world to fathom, difficult for others to reach — but the likenesses are dwarfed by the ways their stories diverge.

I ask my children, teenagers now, what they remember about their time at The May. “Discovering I liked green beans,” says one. “Learning how to write my Rs forward instead of backward,” says another. “The way Gio always asked for more juice before he’d gotten any yet.”

Diagnoses can be useful tools … but they can also limit our ability to perceive all the complexities and variations within the individual who exists beyond the label.

Er…do they remember anything specifically about autism?

“Sometimes a kid would get really upset and need extra help,” says one. “Yeah,” chimes another, “like me, the time I ran into a pole!” My daughter says, “Remember my friend Steven? I don’t know if he was on the spectrum or not.” She is pensive, frowning, then suddenly brightens: “I think it’s cool I still don’t know.”

I get what she means. Andrew Solomon talks about this: diagnoses can be useful tools, capable of delivering hope and relief. But they can also limit our ability to perceive all the complexities and variations within the individual who exists beyond the label. While we seek information, looking for ways to cure or break through, we do well to remember there’s value not only in getting answers, but also in the state of not knowing. In the case of my daughter and her friend, what they didn’t know constituted the opposite of a failure. In no small way, it’s what allowed them to connect.

Autism early childhood JDAMblogs parenting preschool
Why I Sent My ‘Typical’ Kids To A Preschool For Autistic Children2015-02-132017-02-14https://matankids.org/wp-content/uploads/2016/01/logo.pngMatanhttps://matankids.org/wp-content/uploads/2016/01/logo.png200px200px
Contact Us
Menu
Subscribe to Newsletter
Copyright Matan. All Rights Reserved