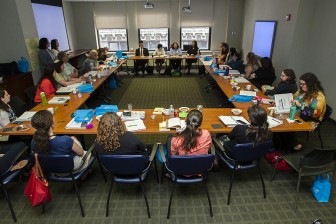 This is a view from the Matan Institute for Educators and Youth Directors in New York City on June 14, 2015. (Photo by Tom Nycz)

Matan was founded in the year 2000 by Meredith Englander Polsky, Dr. Stacy Berrin and Lori Strouch Kolinsky, all of whom recognized the need for the Jewish community to be more inclusive of children with special needs and their families. Gathering around kitchen tables in their Manhattan apartments, the three women traded stories about children they had encountered who were turned away from Jewish education experiences; the heartbreak of their families; the unrealized potential of such a significant percentage of the Jewish people. After several months of these discussions, the three embarked on a journey to help ensure that children with special needs could access – and be successful in – high quality Jewish education experiences.

In 2010, Matan leapt forward with a renewed focus which expanded exponentially the organization’s ability to impact the Jewish community as a whole. This model, which focuses on professional development and mentorship of current of future Jewish leaders and educators, has received accolades by participants, press and leaders throughout the field of Jewish education.

Matan spent the first 10 years focused on direct service with schools and families primarily in the New York metropolitan area. Keeping in mind (and heart) all of those children about whom they had traded stories, Matan’s founders worked school by school, child by child, in order to help Congregational Schools be more inclusive of students with special needs.  Matan’s 10th year brought with it a strategic evaluation that revealed Matan was making a tremendous difference for a relatively small number of schools and families. It was not yet changing the landscape of Jewish education – but it could.