Under the Table – A D’var Torah for Shemini 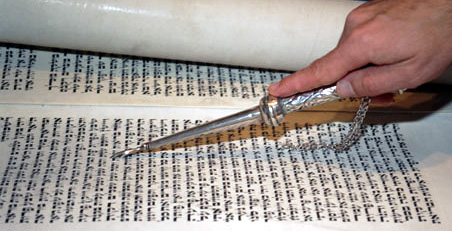 The Chasidic Rabbi Nachman of Bratslav tells of a king’s son who goes mad: he believes he is a turkey. The boy removes all his clothes, spends all his time under a table and refuses to eat normal food. Distraught and alarmed, his father summons in all manner of experts, but none can cure the boy.

His tale of disappointment turns into a tale of re-visioning and change: After a long time, a wise man arrives at the palace, and asks to see the prince. The wise man joins the boy under the table, and declares himself to be a turkey. Little by little, the two become comfortable with one another, and gradually, the man encourages the turkey-prince to put on his clothes, then eat human food, and finally, to join the rest of the family. In this manner, says the Chasidic master, the wise man cures the prince.I think of this story often when I meet other parents of children with disabilities. We discuss the ups and downs of raising children with a wide variety of issues, from autism to bipolar disorder to Tourette’s syndrome to ADD. (My own middle son — now 19 years old — has autism.) Parenting such children, one can easily empathize with Rabbi Nachman’s king, who is confused, saddened and desperate to help his son.By joining the child in his world, the sage first transforms himself, ultimately paving the way for the transformation of the child. For many parents of children with disabilities – often highly unusual children whose neurological or physical makeup prevent them from relating to the world in “typical” ways – this painstaking, exhausting approach is sometimes the only effective one. Parents who want to reach their children will journey – for days, months, years – out of typical life and into their child’s orbit. They join them under the table – a powerful way to reach one’s child. But it also can be difficult and sometimes terribly isolating.

In this week’s Torah portion, two of Aaron’s sons, Nadav and Avihu, themselves act in an unusual way. They enter the Sanctuary and — as the Torah describes it — “offer strange fire” to God. (It might have been an isolated incident, but could have been the final act of years of this kind of behavior.)  As a result, the two young men are punished and wiped out by God. But what was their “strange fire”? Was it – as some interpreters suggest — something impure, a sign of arrogance, rude behavior, and crossing forbidden boundaries? Or was it something else? Some scholars sympathetic to the two suggest it was their overflowing passion for God — their uncontrollable desire to be close to the divine — that ultimately burned them.

Fire can be dangerous and harmful. But it is also the source of light and heat. What if Nadav and Avihu’s passions – instead of being viewed as treacherous and out of bounds – had been seen by parents, mentors and peers as warm and inspiring? What if their fire had been taken not as destructive to others but enlightening? A strange fire, perhaps, but an acceptable one? Different – but not deplorable?

The “strange fire” alight in my son is called autism. And we are not alone: One child in every 68 nationwide is now diagnosed with autism. The Jewish community is not immune. The children affected by autism and other disorders are challenging, unusual and sometimes distracting. But they are also beautiful, creative, loving and bright, and– as Jewish tradition teaches – made in God’s image.

And they are ours.

Perhaps, instead of seeing a dangerous, uncontrolled combustion, we can begin to perceive their fire instead as precious; something divinely given and burning with a holy passion. Something for us – not just their parents, but their entire community (and our synagogues, schools, youth groups, camps and social circles) to warm ourselves by. Something not to transform, but to be transformed by.

Was the turkey-prince really cured by the wise man-prince? Probably not. He probably always retained his unusual disposition, probably always felt a little odd, may have even yearned to slide back under the table. But the sage’s wisdom made the prince feel welcomed and wanted. Perhaps the cure was found – not for him, but for those warmed by his special fire.

Rabbi Shawn Fields-Meyer is School Rabbi at Milken Community Schools in Los Angeles and co-author of “A Day Apart: Shabbat at Home”.