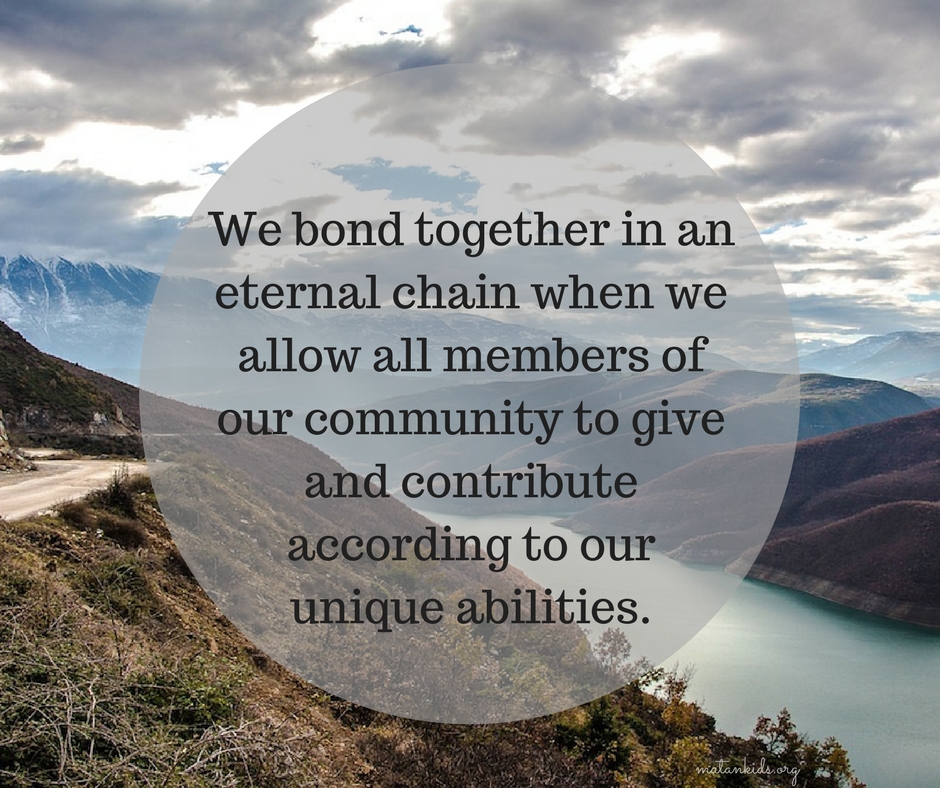 This week, amidst the talk of burnt offerings, and offerings of ashes and animals,
with all the splattering of blood, and oil, and wine, we find Moshe (Moses) at a turning point.

It is time for Moshe to begin sharing the leadership of the Jewish people. This moment is filled with tension. In some ways, this is the height of Moshe’s career. Yet, in this parasha, Moshe goes from being the exclusive High Priest to inducting his brother, Aaron, and Aaron’s children into the priesthood. Moshe will still be the great teacher of the Jewish people, but God instructs him to open up and share space with Aaron and his descendants, who have different abilities that make them right for the priesthood.

No sound captures this challenge and opportunity of making way for a diversity of people and abilities more than the triple decker Shalshelet. The Shalshelet is a clearly
recognizable musical cantillation sign, which is read like a trumpet blasting three introductions to a king. Moshe’s big moment, his big test, is accompanied by this musical sound- a significant sound which appears only three other times in the Torah. The moment begins in Leviticus Chapter 8, verse 22, as Moshe readies the “Ram of Completion” (Ayl milu’im), and welcomes Aaron and his sons to place their hands on it, thus including them in the act. It culminates in verse 23, as Moshe slaughters the ram, with the Shalshelet appearing over the word “vayishkhat” (and
he slaughtered.)

Is Moshe slaughtering his own view of the community, where he once held exclusive control of the priesthood? Is he cutting himself off by letting someone else in who has abilities that differ from his own? The Shalshelet – which literally means a chain,
or a triple layered string – is a commentary of our tradition, memorized by the reader but not written into the Torah itself. It highlights that this is a critical time in Moshe’s life. Knowing that, how will Moshe respond in this moment? Will he see partnering with Aaron and his sons, giving them a role that he will eventually give up, as a way of making the Jewish people stronger? Or will he see it as a way of succumbing to weakness and sacrifice?

The Shalshelet, as its sound and name indicate, is there to tell us that Moshe understood that by opening up the priesthood and by welcoming Aaron and his sons, he was building a stronger Israel. Moshe was creating a chain that would make the community more connected to itself and to God as it used all of its available strength and resources. The ram would be slaughtered, but through this holy ceremony Moshe would show the people then and for generations that we bond together in an eternal chain when we allow all members of our community to give and contribute according to our unique abilities.

In our yeshiva, Yeshivat Chovevei Torah, our students spend a week every year in an intensive learning seminar focused on the importance of all Jews having a part in the Torah and an active role in the destiny of the Jewish community. YCT students review challenging case studies and carefully dissect the laws and customs that relate to ritual and communal practices as they work to find ways to express the values of belonging and the importance of inclusivity. For example, no person should be excluded from the opportunity to recite ritual blessings, read or learn Torah, or to partake in the rituals of Jewish holidays throughout the year – whether it is because they have limited mobility, they are blind, or because they have a hard time reading or speaking. Our communities, synagogues, and schools are challenged with ensuring that we are not excluding communities, but rather that we are making way for Moshes and Aarons, for the beautiful gifts that all of us, in all of our
diversity, have to contribute to Jewish life and to a connection with God.

Rabbi Asher Lopatin is the president of Yeshivat Chovevei Torah Rabbinical School, an Orthodox rabbinical school that teaches an inclusive, open and welcoming Torah. Previously, he was the spiritual leader of Anshe Sholom B’nai Israel Congregation, a modern Orthodox synagogue in Chicago, for 18 years.  He received his ordination from Rav Ahron Soloveichik and Yeshivas Brisk in Chicago, and from Yeshiva University, as a Wexner Graduate Fellow. A Rhodes Scholar with a M.Phil. in Medieval Arabic Thought from Oxford University, Rabbi Lopatin is the author of numerous scholarly and popular articles.