Tiny Grains of Sand – Now I Am Here 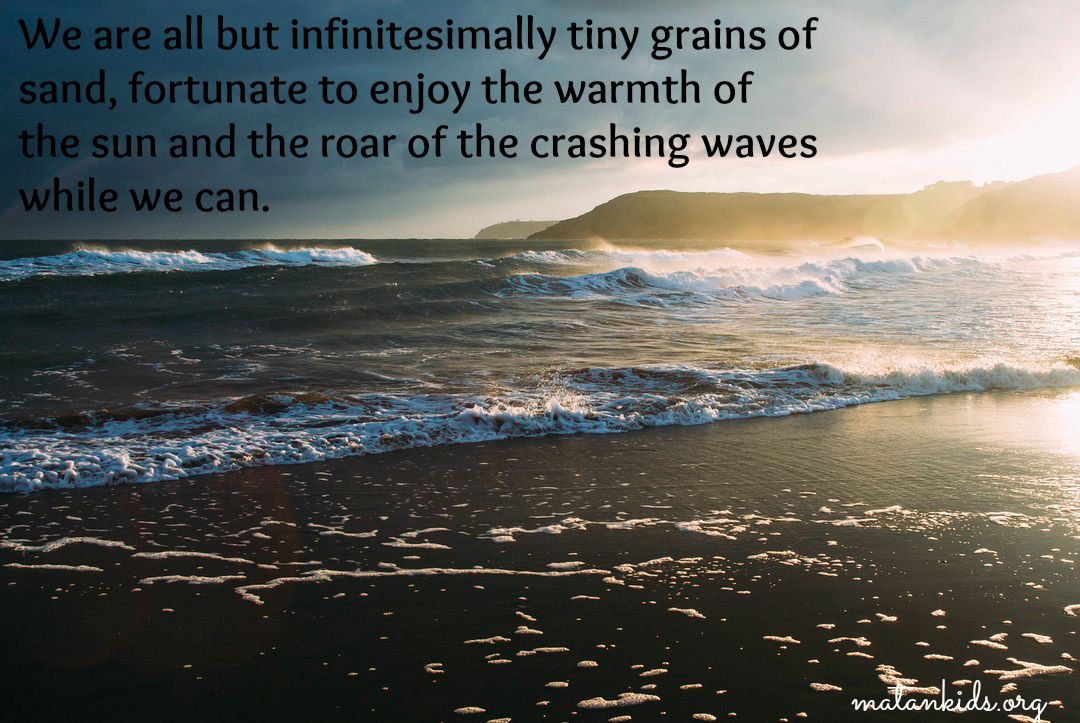 The beach —- virtually any beach — has always been a quasi-spiritual experience for me. The open skies, crashing waves, warm air and soft sand beneath my feet trigger in me a sense of freedom, exhilaration and tranquility that I experience nowhere else.

Sand courses through my bloodline, beginning on West 23rd Street in Coney Island, Brooklyn, where my grandparents moved in the 1930s on the advice of doctors who thought their young cerebral palsied son’s legs and torso would be strengthened by daily walks on the beach. It drifts decades later to the quieter shores of neighboring Manhattan Beach, Brooklyn, where the teenaged daughter of that same young boy with CP walked with her friends on so many lazy Sundays, mini boom-box and suntan lotion in hand. And it comes to rest on the spacious, unspoiled beaches and dunes of the Outer Banks, where that same teenaged girl, now a middle-aged mother, vacations with her North Carolina-bred husband and their three sons.

We love bringing our children here in late August. We spend every precious minute of the last week of summer in complete retreat from the grind of daily life, reconnecting ourselves to one another and restoring our physical and mental energy before we enter the whirlwind of the new school year and the Jewish high holidays. We have enjoyed so many fun times here with dear friends, watching our children mature and change from year to year.

There have also been times of quiet reflection and even sadness. It was here in the Outer Banks in August 2001 that my husband and I grappled with the fear we felt upon learning that I had been diagnosed with thyroid cancer while pregnant with our oldest child. I remember as if it were yesterday sitting on the beach as my husband wept. I looked into the depths of the sea and tried to reconcile the personal God of my Orthodox Jewish upbringing with the unfairness of my own situation. It was at that moment, staring into the vast expanse of the Atlantic Ocean, that I realized my own insignificance amid the enormity of the world I lived in — I was but a statistic, one tiny strand in an unending web of humanity. In less poetic terms, a certain number of people every year, especially young women in their 30s and 40s, are diagnosed with thyroid cancer. I was just one of those people. It was fate, the way of the world. I was one tiny dot of sand on a shore of billions of similar granules.

What a comfort this revelation was to me. I had spent my childhood and young adult life observing with a mixture of wonder and bitterness my own fate as the only child of severely disabled parents. “I can’t believe I’m me,” I so often thought to myself. What were the odds that I, alone among my peers, perhaps alone among millions of people around me, was the non-disabled child of two cerebral palsied people, with virtually no family other than their daughter? I couldn’t believe I was that person. I lived in almost incredulous disbelief at the uniqueness of the situation, and I resented the enormous responsibilities and hardships I experienced from a young age. But on that day, on the Outer Banks, contemplating yet another major life hurdle to overcome, my world view fundamentally changed. Finally, after 30 plus years, I came to some peace with my fate in life. 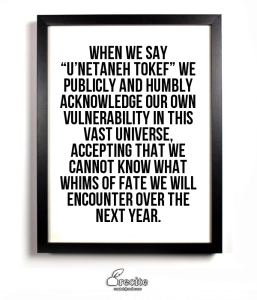 Weeks later, after the horrors of 9-11 and my thyroid surgery on 9-14, which together left me physically and emotionally debilitated, I came to understand the central High Holiday prayer “U’Netaneh Tokef” in a completely different light. I was no longer afraid, as I had been since childhood, of the specter of God as a personal judge, ready to impose reward and horrible punishment at the drop of a hat. I finally understood the prayer as the ultimate expression of our fragility as humans on this earth — we are all but infinitesimally tiny grains of sand, fortunate to enjoy the warmth of the sun and the roar of the crashing waves while we can; our fate is as unknown as that of any grain of sand or small creature burrowing a hole on the shores of a beach. When we say “U’Netaneh Tokef” we publicly and humbly acknowledge our own vulnerability in this vast universe, accepting that we cannot know what whims of fate we will encounter over the next year.

This year the “U’netaneh Tokef “prayer will hold special resonance for me. My brilliant, funny, heroic father — who defied the odds to earn two masters’ degrees, work for nearly three decades, and marry and raise a child — was diagnosed with a rapidly progressing form of dementia. As recently as nine months ago his mind and spirit were intact as ever, but now his physical and cognitive condition has deteriorated so quickly — the loss to all those who love him has been so sudden and so acutely painful. How can we rationalize the profound unfairness of such a cruel diagnosis being meted out to a man who suffered so much throughout his life, and overcame so much? Wasn’t living for 82 years with cerebral palsy enough? As a dear friend of mine said, “If anyone deserved to die in his sleep, it was your father.”

Yet it is not to be. Not for him, and not for my mother, who suffered and overcame so much in her own right, defying her family’s wishes and expectations to marry and to bear and raise a child. Now she must watch her husband endure an undignified, frightening death, unable to physically help him because of her own complete immobility, and unable to verbally advocate for him because of her severe speech impairment, which she has had since birth.

Like that pivotal day on the beach with my husband, I am once again keenly aware that I am but a pawn in the enormous numbers game of life. Millions of adult children grapple with their parents’ dementia diagnoses, I know. But how many of those people are the only children of cerebral palsied parents, with no other family? How many have mothers with severe speech impairments that render them incomprehensible to virtually anyone except their daughters?

Perhaps only one. But I no longer pinch myself thinking “I can’t believe I’m me.” Our individual stories may differ but in the end we are all small in the face of the universal truths of the “U’netaneh Tokef” prayer. The Rosh Hashanah liturgy reminds us that in the face of forces that are often beyond our control, we are nevertheless mandated to live individual lives of positive action and purpose. Regardless of the challenges we face, we must create and embrace lives of meaning, compassion and love. May we all be blessed in the New Year with the physical and emotional strength to fulfill that ideal.

Guila Franklin Siegel is an attorney by training, and worked for over a decade in the areas of Jewish social change and Jewish philanthropy. She lives in the Washington D.C. area.