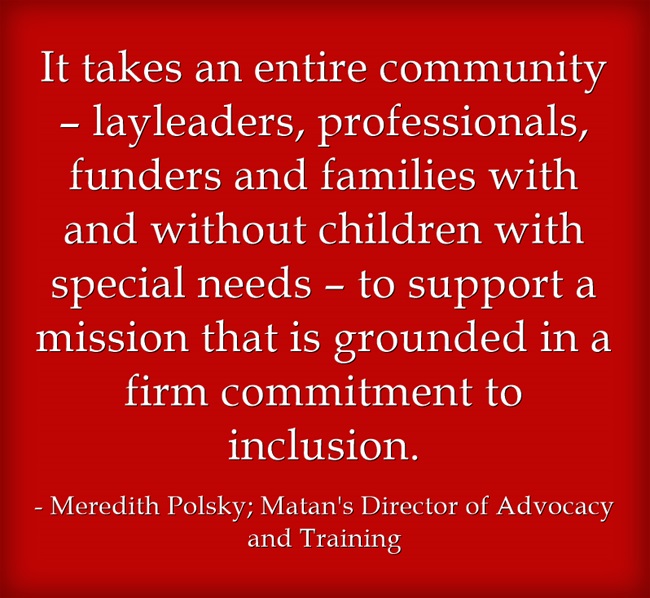 It has been a challenging week in the world of Jewish Special Education, as news of a blind camper asked to leave Camp Ramah in Canada spread at lightening speed over social media and other outlets.  Though Matan has been following these events from the first moment we learned of them, we hesitated to make a statement (or spread the story even more widely) until we could hear “another side”, or until some resolution was reached.  We will never know exactly what led to this unfortunate series of events, but as a Jewish Special Education organization that has seen families suffer time and time again, we would like to offer some thoughts.

What we have seen over the past four days is that this is not solely about one child.  The outrage that many people expressed online, while certainly out of support for one family and their child, has much more to do with the growing sentiment that the Jewish community has not yet reached its potential in how we include all individuals in our Jewish institutions.  That one father was able to garner so much support in such a short time is a testament to just how many in our extended Jewish community want to see change.  While addressing special needs in the Jewish world has long been the work of a relatively small number of people, we now see that even those not “directly” affected by disabilities are taking a stand towards ensuring every child his/her birthright – a Jewish education and fair access to the Jewish community. That in and of itself is a step in a very positive direction.

On a daily basis, Matan works to educate, empower and advocate on behalf of Jewish children with special needs and their families.  In the twelve years since Matan’s inception we have learned that it really does take all three.  By truly recognizing the responsibility we have to be partners with parents and families, much of what happened at Camp Ramah last week could have been prevented.  We do believe that staffs at Ramah camps across North America are well-intentioned and aim to accommodate and include.  We also know that it takes more than one person to succeed or fail in these arenas.  It takes an entire community – layleaders, professionals, funders and families with and without children with special needs – to support a mission that is grounded in a firm commitment to inclusion.  It cannot and should not be about who is at the helm at any particular moment, but about the dedication of an entire Jewish community that expects our leaders to educate, empower and advocate – and where leaders are supported in that work.

We cannot expect to get it right the first time, every time. We can expect open and honest dialogue that includes families and their children.  We must expect those in our broader community to care about inclusion whether or not a child’s parents have the wherewithal and the forum to generate support wide enough to reverse initial decisions.   And while we wish no family or child would ever have to experience exclusion from the Jewish community, it is our moral mandate to learn from those that have been scorned and continue to work towards a meaningfully inclusive Jewish community.