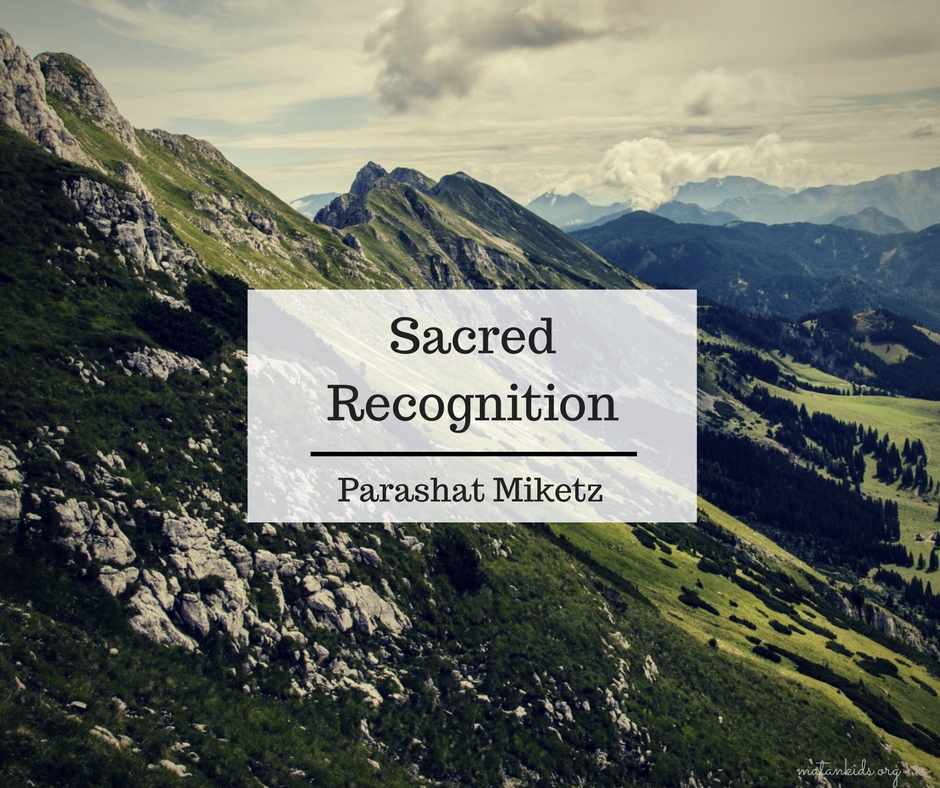 In Miketz, the penultimate Torah portion of the Joseph narrative, Joseph experiences a dramatic reversal of fortune. When we last saw Joseph, he had gone from his father’s favorite child, to a slave, to a prisoner in Egypt. But after Joseph interprets Pharaoh’s dreams to predict seven years of plenty and seven years of famine, Pharaoh makes Joseph his second-in-command. Joseph is in charge of storing grain during the good years, and rationing it during the famine. When the famine spreads from Egypt to Canaan, Joseph’s brothers come to Egypt in search of grain, only to reunite with their long-lost brother!

Many years have passed since Joseph’s brothers sold him into slavery, but Joseph recognizes his brothers immediately. The recognition, however, is not mutual:

“When Joseph saw his brothers, he recognized them; but he acted like a stranger toward them and spoke harshly to them….For though Joseph recognized his brothers, they did not recognize him” (Genesis 42:7-8).

The brothers’ lack of recognition allows Joseph to test his brothers’ loyalty before he reveals himself to them. But it also raises the question: why didn’t Joseph’s brothers recognize him?

Some rabbis suggest that Joseph had aged considerably since their last encounter, or that he had adopted an Egyptian name, along with Egyptian styles of dress and speech. Or perhaps Joseph had intentionally disguised himself, so his brothers wouldn’t recognize him.

But there may be a much simpler answer: Joseph’s brothers didn’t recognize him because they weren’t looking for him.

The word l’hakir “to recognize,” weaves itself throughout the Joseph story. Joseph’s brothers use it when they ask Jacob to identify Joseph’s bloodstained coat; Tamar uses it when she asks Judah to identify his staff, seal, and cord, which he had left behind during a moment of indiscretion. Recognition, in this story, is the first step in taking responsibility. To recognize is to acknowledge the reality of the situation.

How many times have we in the Jewish community not been able to meet someone’s needs, because we didn’t know what they were? It is only when we recognize the needs of others can we offer solutions to the challenges one might face in our communities.

A few years ago, a friend and I were hanging out in Boston. When it was time to go home, we headed for the nearest MTA station, only to find that it wasn’t accessible by elevator. This meant that my friend, who uses a power-chair, couldn’t get to the train. As we continued our search, we found that many of the stations lacked elevator access, and even the city police were not well-informed as to which stations were accessible.

Eventually, we found an accessible station, but the experience helped me to recognize something I had previously never considered. Now I look for accessibility issues wherever I go. Is this door wide enough to accommodate a wheelchair? Is there a ramp leading up to the entrance (or the bimah)? Would someone with a disability be able to use our bathroom? This quest for recognition stretches beyond physical disabilities, as I consider whether everyone can see, hear, move, and eat in my home and in our synagogue. Are we a place where everyone can feel safe and welcome? Are we a community where everyone can participate and understand?

Often—even in my own synagogue—the answer is no, or, I would hope, “not yet.” But by seeking to recognize the challenges that people face in being a part of our communities, we can begin the sacred work of meeting each other’s needs.

Rabbi Leah Rachel Berkowitz is the spiritual leader of Vassar Temple in Poughkeepsie, NY. Her writing appears on the “Jewesses with Attitude” blog (jwa.org/blog) and in The Sacred Calling: Four Decades of Women in the Rabbinate. She blogs at http://thisiswhatarabbilookslike.wordpress.com