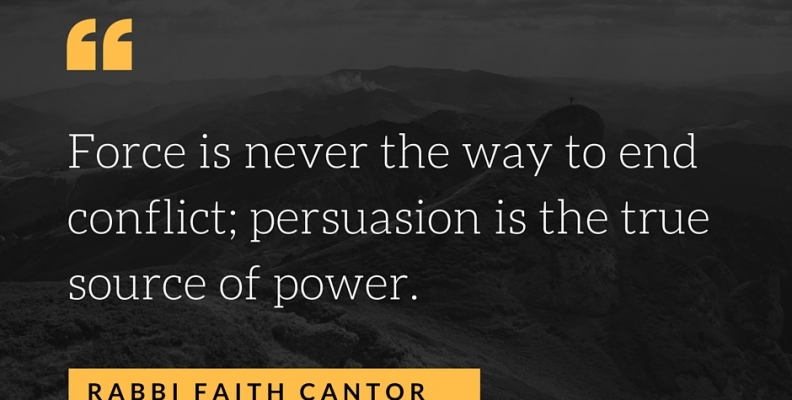 The Power of Persuasion – Parashat Korach 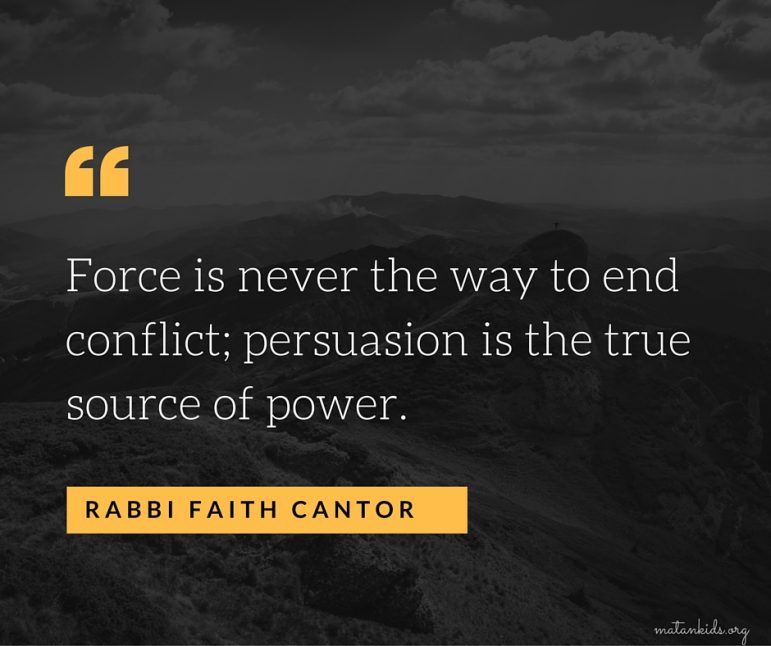 Parashat Korach is most well-known for an intense narrative about Israelite leaders who rise up and rebel against the authority of Moses. Korach, the self-appointed leader of the rebellion, was angry that both political and religious leadership was staying in Moses’ family, even though he was also from the tribe of Levi. The Reubenites, descendants of Reuben, Jacob’s first born, felt as though they should have some claim to leadership, too.

However, it is not the rebellion that really caught my attention, but rather the resolution. Moses, concerned that Datan and Aviram were pushing the rebellion too far, said, “By this you shall know that it was the Lord who sent me to do all these things; that they are not of my own devising: if these men die as all men do, if their lot be the common fate of all mankind, it was not the Lord who sent me. But if the Lord brings about something unheard of, so that the ground opens its mouth and swallows them up with all that belongs to them, and they go down alive into Sheol, you shall know that these men have spurned the Lord.”

No sooner had Moses finished speaking than the ground opened up and swallowed the rebels. This should have been the end of revolt; point proven. Yet, the very next day, the whole Israelite community grumbled against Moses and Aaron. “You have killed the Lord’s people…!” It is clear that the sudden and violent end of the rebellion was not a satisfying conclusion for the Israelite people. It is only after God commands Moses to take twelve staffs and set them aside while allowing only Aaron’s staff to blossom; revealing him as God’s appointed priest, do the Israelites give up on the rebellion.

I came a across a modern commentator who puts forth the idea that Moses’ attempt to end the rebellion with violence fails and it just sets him further apart from the Israelite people. Force is never the way to end conflict; persuasion is the true source of power.

Matan understands the power of persuasion, transforming that into advocacy to change the lives of students and their families. And while persuasion is a great source of power, I believe that Matan is also at the forefront of leading a rebellion. Korach is not shown great respect or kindness by traditional commentators because he is arrogant and self-promoting.  Matan’s rebellion is the complete opposite. It is the best use of persuasive power. Matan doesn’t stand up against the existing systems, it stands side by side and says let’s be agents of change.

It is my prayer that Matan continues to lead a persuasive and powerful rebellion against systems that don’t foster inclusion. And that this rebellion, one that needs to take place, is also won by the power of persuasion.

Rabbi Faith Cantor is the Rabbi Educator at Beth El Congregation in Baltimore MD. Faith has been involved with Day School, Camp, and Congregational School education, and has always been involved with inclusion programs.  She is a Matan Mentor for Cohort 6 of The Matan Institute for Education and Youth Directors in New York City.