Parashat Va-et’nachan – Teach These Words Diligently To Your Children

During the month of February (Jewish Disability Awareness Month) Matan shares a weekly d’var torah linking inclusion to the upcoming Torah portion. We say often that JDAM may only be one month, but Jewish disability inclusion needs to happen all year round. So to that end, we will be sharing such d’vrei Torah weekly beginning with Bereshit (October 10, 2015). These posts will run on Wednesdays to serve as inspiration for Shabbat sermons. 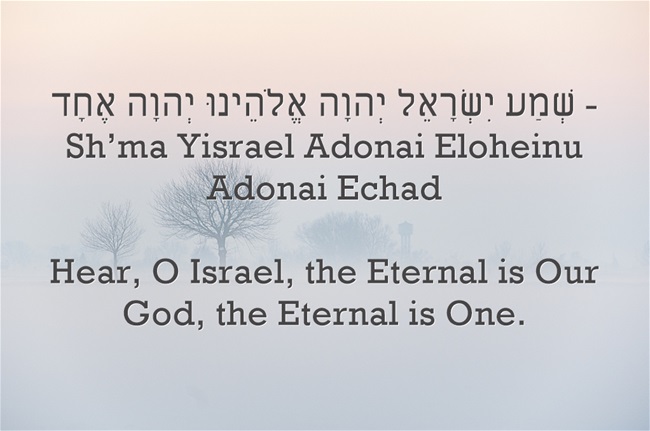 The teens stood in a circle, their group deciding with their counselors how they would present and lead their interpretation of the Sh’ma for the rest of camp. Each cabin at the URJ Kutz Camp: NFTY’s Campus for Reform Jewish Teens, had been given a different prayer in the service to creatively express. The young people in this cabin chose to do movement, and figured out a physical expression of each word of the prayer: putting their hands up to their ears (Sh’ma), then facing east (Yisrael), then moving their arms in a circle over their heads (Adonai), then putting their hand to their hearts (Eloheinu), then moving their arms in a circle a second time (Adonai), then holding a finger up (Echad).

As with every prayer in that service, the rest of the camp eagerly and joyfully learned the movements and expressed the prayer with this cabin.

Of the thousands of times that I’ve heard and said and imagined this prayer over a lifetime, this was, perhaps, the most meaningful. But what gave it power was not the moment itself – a group of teens reciting the prayer as their own, with all their hearts, souls, and selves – it was when some of the other teens in camp started doing these movements with the Sh’ma at the next service. And continued to do so past when these particular campers went home.

Admittedly, we weren’t certain at the outset that this group of campers would be able to fully connect with this activity and this interpretive worship experience. But we tried. And they thrived. This particular group of campers came to Kutz for Mitzvah Corps, a camp program for teens on the autism spectrum, and from that service (their first night of camp) on, they continually inspired camp and helped create an environment in which many forms of learning and inspiration were present. 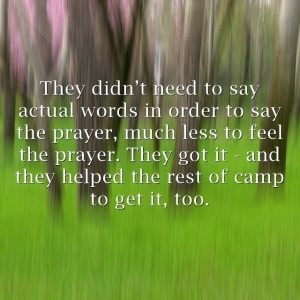 Some of the teens, by the way, who offered this prayer, who created this new kavanah (intention), who brought themselves into reciting these ancient words, were non-verbal. But they didn’t need to say actual words in order to say the prayer, much less to feel the prayer. They got it – and they helped the rest of camp to get it, too.

Perhaps that’s truly what the v’ahavta (the paragraphs in the Jewish prayer service that follow the first line of the Sh’ma) means – that the expression of our connection with the Divine in the universe can, and should, utilize any and all of our selves.

And so, when we teach these words diligently to our children (and aren’t we all children, still growing and learning and maturing in some way or other?) as parasha va-et’chanan instructs us, this becomes a good reminder that it means ALL of our children. Those who express themselves in “expected” ways and those who express themselves differently. Those who experience the world in the same way we do and those who have other experiences. It’s our job to make sure that the doors are open. The doors of Jewish experience. The doors of Jewish learning. The doors that reveal our hearts and souls. The doors that offer enlightenment and allow us all to hear in different ways.

The Eternal Power that connects us to ourselves and to our communities can be accessible to all of us. 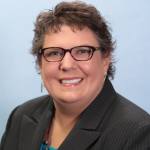 Rabbi Elisa Koppel is the Director of Lifelong Learning at Congregation Beth Emeth in Wilmington, DE. She believes in creating meaningful moments of connection which reach all segments of the diverse population which exists within the Jewish community.