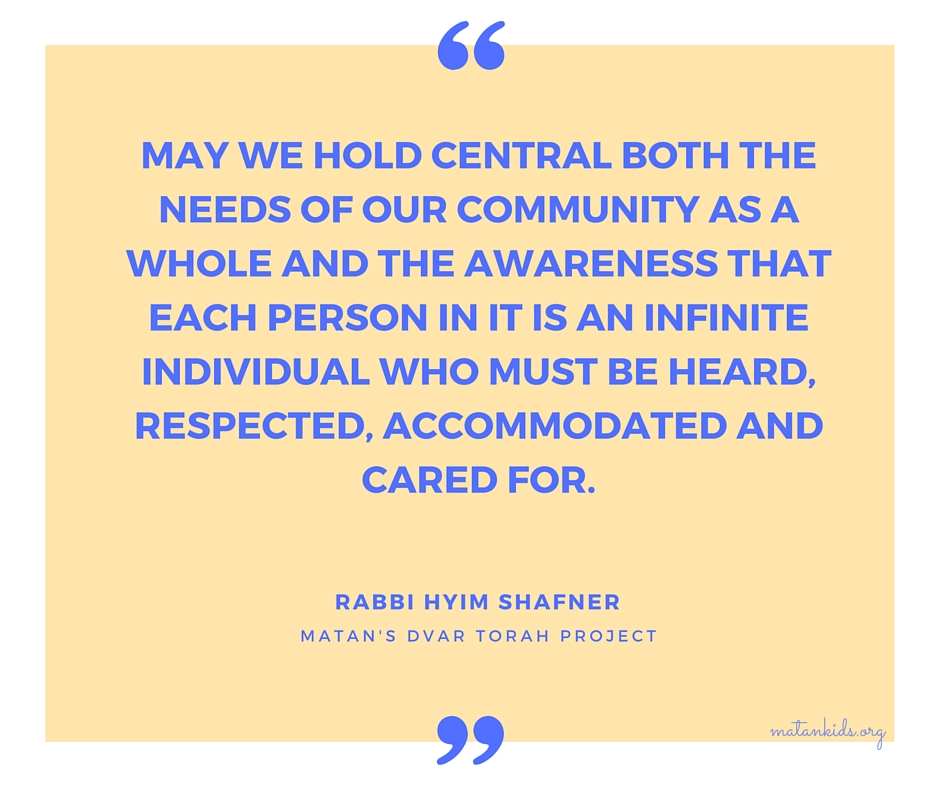 In the second of this week’s two Torah portions, Ma’asey, the Jewish people stand on the banks of the Jordan River poised to enter the Land of Israel. They are commanded to make war with the people they will encounter there and to, “Drive out all the inhabitants of the land from before you, destroy all their molten images, and devastate all their high places; And you shall dispossess the inhabitants of the land, and live in it; for I have given you the land to possess it.” (Numbers, 33:50-54)

War is a national undertaking which requires risking one’s life and is by definition a matter of ultimate principals, more important to those who wage it than their individual lives. War would seem to epitomize a situation in which the conforming needs of the many outweigh the unique needs of the few, a project which would have no place for taking into account the requirements of individuals.

In contrast, at the end of this week’s first Torah portion, Mattot, when two of the 12 tribes wish to settle alone on the eastern side of the Jordan and not enter the Land of Israel to the west, Moses makes clear that they may not abdicate their responsibilities to their brethren as a whole but must go to war with them to win the land to the west of the Jordan even though they do not wish to occupy that part of the land.

How are we to reconcile these opposite values, both of which seem to be important to Judaism?

I think Judaism’s philosophy and commandments outline a beautifully balanced dance.  The community’s values, needs and vision are of utmost importance. But even in a war, the moment of greatest communal hegemony, we are cognizant of the individual and personal needs.

May we take instruction from this Torah portion to hold central both the needs of our community as a whole and the awareness that each person in it is an infinite individual who must be heard, respected, accommodated and cared for. As the great Talmudic sage Ben Zoma said upon seeing throngs of Jews on the Temple Mount on the festival of Sukkot, “Just as each of their faces are different so too are each of their personalities unique, blessed is G-d, the Knower of secrets.” (Talmud Berachot 58a)

Rabbi Hyim Shafner, LCSW, is the rabbi of Bais Abraham Congregation in St. Louis, Missouri. Prior to Bais Abraham he was the Rabbi of the Hillel at Washington University in St. Louis and the Rabbi of India for the American Jewish Joint Distribution Committee. He has S’micha, an MSW in social work and an MA in Jewish philosophy from Yeshiva University.

community d'var torah individual need Torah
The Needs of Each, The Needs of All – Parashat Mattot-Ma’asey2016-08-032017-02-10https://matankids.org/wp-content/uploads/2016/01/logo.pngMatanhttps://matankids.org/wp-content/uploads/2016/07/needs-of-each-needs-of-all.jpg200px200px
Contact Us
Menu
Subscribe to Newsletter
Copyright Matan. All Rights Reserved