This post originally ran on the blog of the Union for Reform Judaism.

We are thrilled that such a partnership has formed between two Movement’s camps. We know that inclusion is deepened through relationships and collaboration. And we are proud that these relationships were born of a training led by Orlee Krass, Matan’s Director of Education and National Ramah Tikvah Network Coordinator. 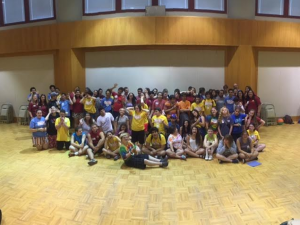 Tuesday [July 14] was one of the most memorable and impactful days that I have ever had in my four years working at the URJ Kutz Camp. On Tuesday, the Mitzvah Corps Program and Peer Engagement Program went on a trip to New Haven, Connecticut to meet campers and staff from the Tikvah program from Ramah New England. Ramah is the conservative camping movement and Tikvah refers to their special needs, inclusion programs.

The idea of bringing two special needs programs together from two different movements was created a year ago when I had the opportunity to attend the Tikvah training at Ramah Darom. At that conference in May 2014, I was inspired to find out how many other Jewish camps are passionate about inclusion. After creating relationships with staff from other URJ and Ramah camps, the director of the Ramah New England Vocational Program reached out to me this past February about a possible trip for our camps. That’s when the trip’s vision started.

It was no question for me and the other Mitzvah Corps On-Site Coordinator, Megan Bernard, to bring Kutz’s typical teens that are in our peer engagement program, known as Chaverim. We believed that it was the best experience for them to take everything they learned at Kutz about disabilities and autism and have a hands-on interaction with teens with disabilities. Sitting at the pool in New Haven, Connecticut, observing the interactions between Kutz Staff and Ramah Staff, Kutz Mitzvah Corps campers and Ramah campers, and the Chaverim with all of the campers was truly inspiring.

On Tuesday, two movements and camps came together to learn, to meet, and to have an incredible time. I am so grateful to have been a part of it, and I am so excited to see what future summers may hold!

Miriam Edelstein is one of the Kutz Mitzvah Corps On-Site Coordinators and is a Junior at Caldwell University.