Life, Liberty and the Pursuit of Happiness – Parashat Behar 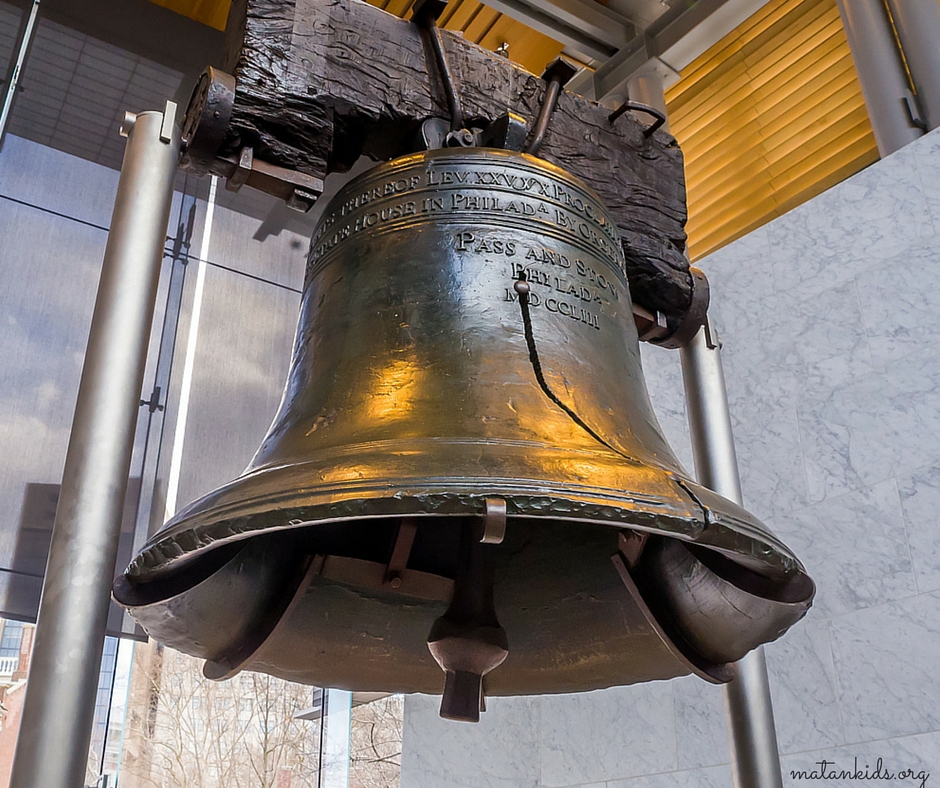 The Liberty Bell in Philadelphia has inspired countless visitors for generations. In the American psyche it represents much more than independence of the original thirteen colonies from Great Britain; it represents the idea of liberty in the fullest sense of the term—freedom from imposed external limits and freedom to achieve the fullness of one’s dreams. It represents the freedom of “life, liberty and the pursuit of happiness” as contained in the Declaration of Independence that was signed below the tower where the bell once rang.

The very name of the historic artifact, the “Liberty Bell,” stems not only from its ringing in liberty atop Independence Hall, but also from the inscription emblazoned above the crack: “Proclaim liberty throughout the land, unto all its inhabitants thereof.” The reference is from Leviticus 25:10 found in this week’s Torah portion, Behar. The Hebrew text וּקְרָאתֶ֥ם דְּר֛וֹר בָּאָ֖רֶץ לְכָל־יֹֽשְׁבֶ֑יהָ refers to the manumission of all slaves in the Jubilee year, the fiftieth year following a cycle of seven-times-seven years during which, at each seven-year interval, the land is to lie fallow and slaves are given the option to go free.

In one sense, Parashat Behar is anachronistic to the modern reader. One wonders whether the Torah’s agricultural vision was ever fully practiced as prescribed given the challenge of an entire nation refraining from agriculture every seven years. Furthermore, the manumission of slaves is more challenging in the sense that slavery is entirely anathema to the modern reader. It’s reasonable to read the text through apologetic lenses. Unlike the Israelites’ enslavement in Egypt, the slaves whom the Israelites later held were temporary and were granted rights in God’s Torah. The Israelites lived in an economic climate in which slavery was a reality, and the Torah was advanced for its time in establishing limits in the owner-slave relationship.

In a larger sense, another passage in Parashat Behar transcends the economic realities of ancient Israel to teach us a vital message applicable today. In the text, God reminds the people of their mortality. Their time on earth is finite. “The land shall not be sold forever,” God says, כִּי־לִ֖י הָאָ֑רֶץ כִּֽי־גֵרִ֧ים וְתֽוֹשָׁבִ֛ים אַתֶּ֖ם עִמָּדִֽי, “for the land is mine; you are but strangers and sojourners with me” (25:23).

Each one of us dwells temporarily on this earth. The Torah reminds us of this sobering fact to instill humility. When we recognize that each one of us is limited in this world, we are more likely to appreciate the limits and the unique gifts of each person. We have a sacred task within the Jewish community and as citizens of our larger society to ensure that children are not left behind as a result of any physical, mental, emotional or intellectual challenges. We are charged with creating an environment of inclusion that welcomes all.

The Torah exhorts us to “proclaim liberty throughout the land unto all its inhabitants thereof.” A contemporary application of this verse should be a “Declaration of Independence” for children with special needs. In addition to the Torah’s appeal to our sense of justice, the Torah reminds us to be humble and remember the limits of each of us. No one can be left behind in our society’s basic dream of “life, liberty and the pursuit of happiness.”