For Activist Who Founded Matan, A School’s Many Failings Hit Close To Home

Written by Meredith Englander Polsky, this post originally appeared on The Jewish Week’s The New Normal: Blogging Disability, May 24, 2013.

In 19 days, my daughter will complete her last year of Jewish day school. I had many visions in my mind for this moment: Seeing her in a cap and gown with friends she’s known since kindergarten; finding the picture of her eating ice cream with a little boy in first grade and placing it next to their prom picture; feeling pride that although we made sacrifices, my husband and I provided a solid Jewish education to our child.

And some of those visions may have become reality, if not for the fact that Lucy will turn 7 just before her last day at Jewish day school. She is completing first grade, not 12th. So she will leave unceremoniously and when she looks back she’ll know she spent two years in day school and moved on. And to be honest, I’m ambivalent: I’m disappointed, but I can’t wait for Lucy to be done there.

This might be surprising to those of you who know from my previous post that I started Matan, an organization which strives to provide a Jewish education for every child. I have been in the field of Jewish Special Education for 15 years. 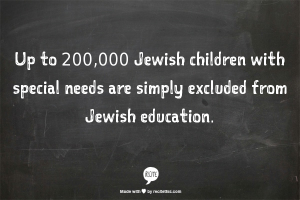 Over those years, I have received feedback that I should say more about my personal connection to this issue. The truth is, though, I started Matan long before I had children of my own and I’ve always taken pride in that. I wasn’t passionate about Jewish inclusion because of my own personal experiences; I was passionate about it because it was the right thing to be passionate about. It still shocks me that there is not more outrage that up to 200,000 Jewish children with special needs are simply excluded from Jewish education.

But, as it turns out, May is Mental Health Awareness Month and I find myself with something to say. By the time Lucy was 3, she was diagnosed with Selective Mutism, a relatively rare manifestation of a social anxiety disorder in which a child is physically unable to speak outside of his/her home. The specifics of that require a whole separate blog post, but Lucy’s hard work and tenacity meant that she was fully speaking when she entered Jewish day school in kindergarten. Anxiety has remained a constant in her life, though, and I knew (or thought I knew) that the more information the school had about her mental health issues, the better they would be able to educate her and the more successful she would be.

At Matan, schools often point the finger at parents who, they say, don’t tell teachers what kids need. So I knew I wanted to be extremely open about Lucy’s struggles. Also, because of my line of work, I felt a responsibility to help the school understand anxiety and how it can impact performance in a classroom. After all, anxiety disorders are the most common form of psychopathology in children. Yet this school rebuffed my attempts to help.

If you had asked me two years ago if Lucy had special learning needs, I would have said no – and I’m confident that my training in this area offset the biases that come with being her mother. I would still say no. With a few simple strategies and a commitment to understanding the “whole child,” Lucy is not a difficult student to educate. But instead of seeing this whole child, the school saw a “complicated child”; maybe even “too complicated,” as the principal told us mid-way through first grade.

There are, of course, pockets of greatness at this school. But in our case, this was not enough to compensate for its many failures: to listen, to communicate, to follow through. In a word, poor customer service. (Did you read Erica Brown’s Jewish Week article on this topic?). So it was pretty easy for my husband and me to decide that Lucy’s day school career would end with first grade.

She will go into 2nd grade at an excellent public school in our neighborhood without an I.E.P. or a 504 plan, the official documents that lay out the educational goals and rights of a student with disabilities. Ironically, her anxiety is far less of a foreign concept in this public school than it was at her Jewish day school. The faculty and staff at her new school are more willing to listen. They recognize that parents know their children best. And they are trained to teach different children in different ways.

Now I understand the advocacy Matan does is more complicated than I thought. This Jewish school – and it’s not the only one – is behind the times not only in accommodating children with special needs, but in educational practice generally.

Why are Jewish schools behind public schools in these very important ways? I am realizing that for children like Lucy, and those with special learning needs, to be included in Jewish education, they must enter an environment in which educators have the training they need to see the strengths in every child, and understand that they are not defined by their special need – or any one thing, for that matter.

Isn’t that what we want for all of our children?