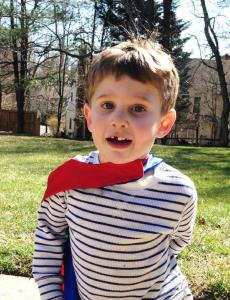 Micah is a curious, out-spoken and spirited 3-½ year old boy. He is a lovable, precocious and rambunctious preschooler. In January of 2014, an assessment by an Occupational Therapist identified Sensory Processing Disorder (SPD), a developmental delay that affects how a child’s brain processes sensory information. Micah’s affected areas include his vestibular sense (his balance, coordination, gross and fine motor movements) and his proprioceptive sense (his awareness of himself in physical space and his concept of past-present-future relationships). In some cases, a child with SPD will be hyper-sensitive to lights and sounds, but in Micah’s case, he is hypo-sensitive (i.e. he does not receive enough sensory stimulation) to movement, physical contact, and social situations. Micah’s developmental needs are expressed through behavioral outbursts, tantrums, and physical aggression toward his teachers and his peers. Despite his disability, Micah can speak clearly with a robust vocabulary, improvise songs, ask insightful questions, count to 25, remember intricate details of a story and imagine incredible play-time adventures. But, he experiences difficulty adjusting to the norms of a classroom like sitting in “circle time” and transitioning from activity to activity or from place to place without individualized accommodations. Micah has been in synagogue-based preschool since his 2nd birthday and his private preschool teachers have striven to support him, but his parents have yet to find a private, religious preschool setting able to fully and successfully meet his needs.

Once he turned 3, Micah was enrolled in a public school preschool program for two days a week, 2.5 hours each day, where he receives services directly. Both of Micah’s parents work, so his remaining 37.5 hours were spent in a synagogue-based preschool. According to his teachers at the public school, Micah succeeds within their setting with its clear expectations, its routines and its structure designed to meet the needs of students like Micah; yet, he is not enrolled in such a program full-time. Though Micah’s parents believe he would benefit from a full-time public school option, none is offered because the full-day options (designed for children with medical fragility or with multiple, significant delays) are deemed “inappropriate” for a child of Micah’s verbal and cognitive strengths.

Despite receiving public school services since August 2013 that enabled “progress,” in November 2013, Micah’s synagogue preschool Director informed his parents that he was “not being successful” in their setting and that “something needed to be done.” After Thanksgiving, Micah was transferred to a second synagogue-based preschool that indicated they may have the infrastructure to support his needs, but this second setting has proved equally difficult for Micah. By January 2014, his parents were asked to find a one-to-one shadow to support Micah within his classroom. Seeking help, Micah’s parents were informed that the public school “doesn’t provide shadows for students.” His parents were able to find someone to support Micah, but the shadow quit after six weeks stating she “lacked the skills” to help Micah with his behavioral needs. After a long and arduous second search, another shadow was hired in May of 2014, but she, too, felt incapable of supporting Micah and needed to stop services after only two weeks.

Like any other child, Micah deserves the chance to experience academic and social successes, to develop a sense of self-confidence and self-worth, and to develop pre-academic abilities that will make him school-ready by kindergarten. A full-time public school classroom, staffed by certified Special Educators, could provide these opportunities more effectively than a private preschool can. But, due to a lack of options, Micah’s parents have enrolled him in a third synagogue-based preschool for the 2014-2015 academic year only because the tuition rate is significantly below the rate of a private, special-needs preschool (about $10,000 per year less). Micah will continue to receive 5 hours a week of public school education, but who knows how he will respond to a third preschool setting with its new routines, new peer group, and new teachers. While they are hopeful that Micah will have a more successful year ahead, based on how “bumpy” the ride has been thus far, Micah’s parents are pretty much just holding on to hope.