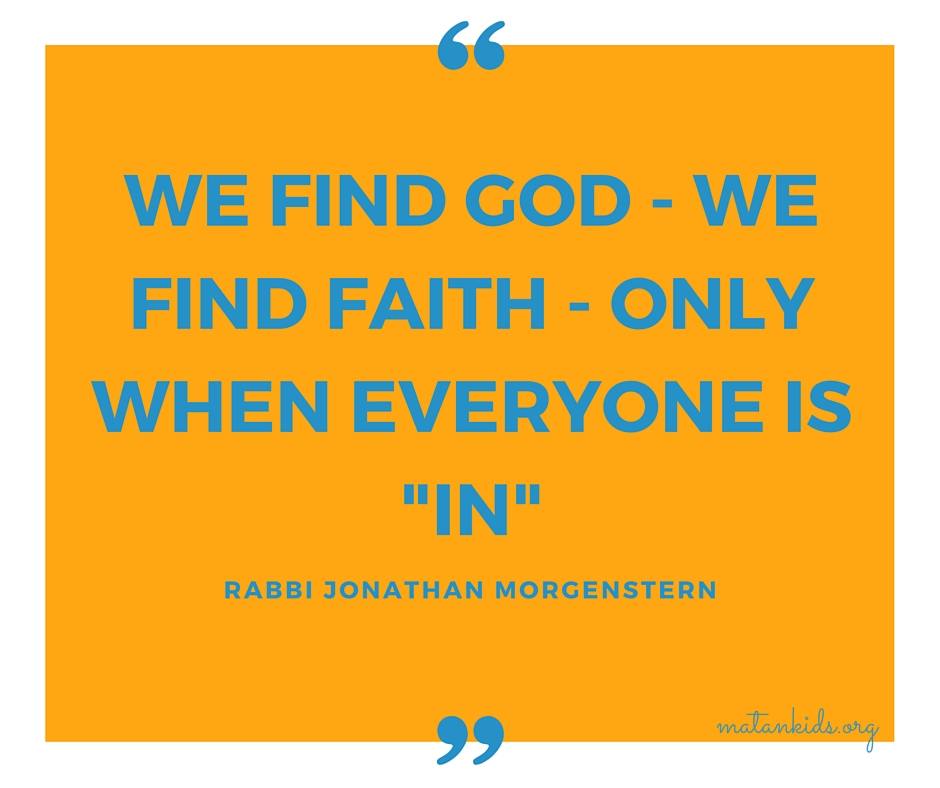 There is no question that Judaism is a religion that believes, first and foremost, in action and behavior that eventually leads to faith in something greater than ourselves – an all-knowing, all-powerful and merciful God. As the Jewish people famously proclaimed, “Naaseh V’Nishma” – first, we will do, then, we will hear it – we were seeking to understand why we’re doing it and for Whom we’re doing it. And, of course, our sages tell us: Do the mitzvot even if you may be doing them for the wrong reasons, “She’Mitoch Shelo Lishmah, Bah Lishmah” – for even if you start out doing the mitzvot for ulterior motives, eventually, you will end up doing them for the right reasons – for God and a belief in the truth of His word.

But what happens if you never get past the “Shelo Lishma” part?…What if it’s never changed, if it’s always been “Shelo Lishma” – for your spouse, for the kids, for the social aspects that synagogue life affords you – for the friends, the play-dates, the tee-times, and the Shabbat lunches – but not really EVER for God and the love of God’s Torah and mitzvot? Is that okay, or is that a case of you living a lie – in which case you should just stop coming to shul and participating in Jewish communal life, altogether?!

The Talmud, in Masechet Shabbat 97a, seems to address this issue as it relates to Moshe’s appraent “sin” in Parashat Chukat: Reish Lakish said: He who entertains a suspicion against innocent men is bodily afflicted, for it is written, “And Moses . . . said, But, behold, they [The Jewish People] will not believe me;” but it was known to…[Hashem] that Israel would believe. Said Hashem to Moshe: They are believers, [and] the descendants of believers; whereas you will ultimately disbelieve. They are believers, as it is written, “And the people believed;”  the descendants of believers: “And he [Abraham] believed in the Lord.” You will ultimately disbelieve, as it is said, “[And the Lord said unto Moses and Aaron,] Because you didn’t believe in Me to sanctify Me before the eyes of the Jewish People.”

Moshe’s tragic sin at Mei Merivah (the waters of strife), as detailed in Parashat Chukat, is not his only transgression.  He also sins in his very first interaction with God at the Burning Bush and is immediately punished for it (by contracting leprosy, for having falsely slandered the Jewish People). Both of these sins have to do with emunah, faith.  But, think about it, faith in who?! Moshe sins, not with regard to a lack of faith in God, but with a lack of faith in the People – in his fellow Jews –and both times he is punished for it. In both instances, Moshe didn’t believe that the People would believe him and trust his word as having come from God.

That’s what he meant when he said, “V’Hein Lo Yaaminu Li – [I believe in You and Your mission] but they will not believe in You,” at the Burning Bush – and that’s why Moshe, in an act of frustration, angrily hits the rock instead of speaking to it. He didn’t think that the people would believe that speaking to the rock, as God had instructed, would accomplish anything to quench their thirst; rather, he figured that it would just lead to more insolent whining and complaining. This lack of faith in the People ultimately leads Moshe, the greatest of all prophets, to a momentary lapse of faith (of his own) in God. As it plainly states, “Ya’an Lo He’emantem Bi L’Hakdisheini L’Eini Bnai Yisrael – Because you didn’t believe in Me to sanctify Me before the eyes of the Jewish People.”

Something amazing emerges from this: “Anachnu Ma’aMinim Bnei Maaminim – We are believers, the descendants of believers”. While faith in God began with Avraham; thereafter, faith in God is no longer the starting point.  It is faith in Man – Faith and Trust in the Jewish People. Faith in our fellow Jews to be there – for us and with us: through thick and thin, in celebration and mourning, through moments of darkness and in times of light – that ultimately leads us to a Faith in God above.

Understood in this light, we aren’t meant to go to shul because we believe, but to come to a sense of belief because we go! This is not a fallback position, or a knock on faith communities – it is a religious ideal! After all, believing in an invisible, all-powerful, and all-knowing God can be downright impossible for mortal man to comprehend; but believing in the capacity of people to be there for each other – believing in the all-encompassing power of (Jewish) community, of heartfelt communal prayer, of the goodwill we can engender towards each other as our children and families grow up together?!…That is something anyone can and should believe in, and it is that faith that leads us to a faith in God, Torah & mitzvot, and a moral and ethical way of life.

Thinking about the ramifications of this idea leads us to the following conclusion; I can only have a “faith-based” community, if EVERYONE IS INCLUDED in that community. The young and the old, the widow and the orphan, the impaired and the disabled, the stable and the unstable, the healthy and the ill, the believer and the non-believer, those who feel marginalized and those who feel isolated. For we find God – we find Faith – only when everyone is “in” and everyone feels the warm embrace of Jewish communal life. That was the important mandate that Hashem sought to instill in the People through Moshe as they were set to enter into the Land of Israel to build our Jewish society of inclusion, sensitivity and love and acceptance for all.  And, it seems to me, that is why Moshe’s inability to instill this vital lesson was so disappointing to God.

Rabbi Jonathan Morgenstern is the Rabbi at the Young Israel of Scarsdale, in Scarsdale, New York. He has served in various educational and counseling positions in the Westchester community. Most importantly, he is, thank God, a husband to Jordana and father to 4 wonderful children.