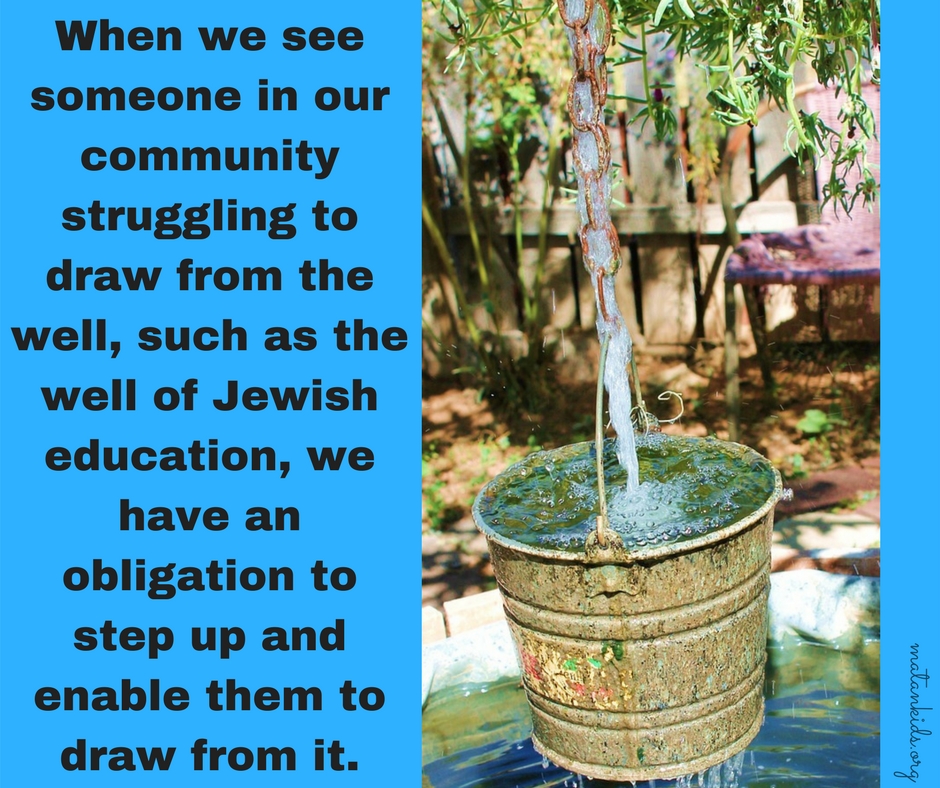 Shemot 2:16-17: Now the priest of Midian had seven daughters. They came to draw water, and filled the troughs to water their father’s flock; but shepherds came and drove them off. Moses rose to their defense, and he watered their flock.

In every organization, resources are limited. There is always more that could be done, more people to reach out to, but not enough time, money, or professionals to do the work. We struggle to decide who is worthy of what we have to give, often making the painful decision to leave someone out, or not admit someone to a program or fellowship. While our minds have ways of making this less painful, at the end of the day, these types of decisions hurt. We want everyone to be able to access what we have, but sometimes it just isn’t possible.

But what if, once in a while, it didn’t have to be so hard. What if at the right moment, in the right situation, and for the right reason, we could say, ‘yes, we can help this person, we do have the time and resources’. This is the type of moment with which Moses is presented. When he flees Egypt after killing the Egyptian taskmaster, he craved anonymity in an effort to save his life. Instead, he runs into the daughters of Yitro, and seeing them prevented from drawing the water from the well, which everyone was seemingly entitled to, he decides to act.

Maimonides, in his Guide For the Perplexed, writes that the drive to act against what is unjust despite the potential consequences is referred to in the Tanach as “The spirit of the Lord”. It is this spirit, he writes, that “the divine assistance which is given to a person, and induces and encourages him to do something good and grand, e.g., to deliver a congregation of good men from the hands of evildoers; to save one noble person, or to bring happiness to a large number of people; he finds in himself the cause that moves and urges him to this deed.”

When we see someone in our community struggling to draw from the well, such as the well of Jewish education, we have an obligation to step up and enable them to draw from it. In doing so, we emulate Moses and others who acted in the “Spirit of the Lord” to do something good.

Rabbi Ilan Schwartz is the Rabbi and Senior Jewish Educator at The Ohio State University Hillel. In his work, he focuses on infusing all of Hillel’s programs with Jewish educational content and atmosphere, engaging students in Jewish life at every opportunity. He earned his BA in Talmud and History from the Albert A. List College at the Jewish Theological Seminary and Columbia University, and was ordained at the Ziegler School of Rabbinic Studies in 2015, concentrating in Jewish Philosophy. Ilan lives in Columbus, OH with his wife Rebecca and four sons.