The End of the Running Man – Parashat Vayetze

The End of the Running Man – Parashat Vayetze; Written by Rabbi Charles Savenor 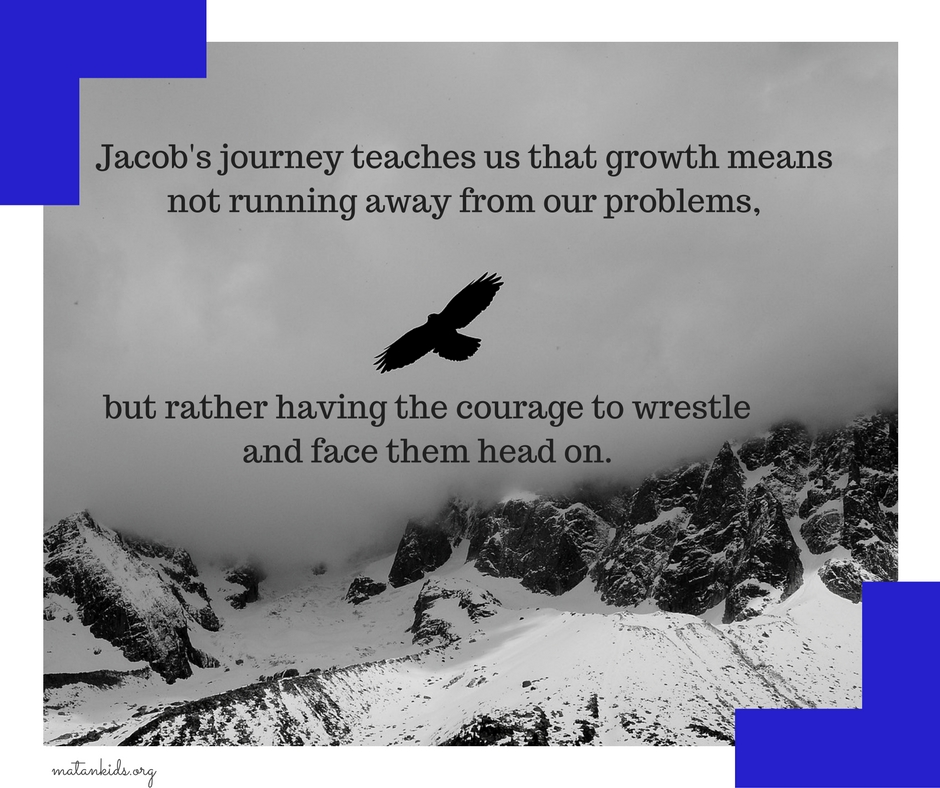 Jacob is on the run. Having tricked his father and brother with his intellectual acuity and physical ability, he must flee his parent’s home, birthplace and country. This trajectory is the inverse of Abraham, our first Patriarch.

Abraham is famously associated with the command of “Lech Lecha”, which essentially means go. One could argue that his grandson Jacob’s slogan could be “Berach Lecha” (Gen. 27:43), which translates as flee or run for your life. That the Torah describes Jacob in perpetual motion – fleeing, leaving and going, we might see him as the original “running man”. First, he runs from his brother Esau and later he flees from his father in law, Lavan.

We should not be surprised by Jacob’s proclivity towards running because his very name is associated with his feet. Jacob comes from the Hebrew word “ekev”, which means heel. What we know about Jacob’s movement in this week’s Torah portion, Vayetze, is not about his running towards something, but rather his running away.

All of this changes when he returns to Canaan later in life for a showdown with Esau. The night before this reunion, the text reads: “And Jacob was left alone; and there wrestled a man with him until the breaking of day.” (Gen. 32:24) In the process of this battle, Jacob is changed in two significant ways. He is not only wounded in his leg, but he also receives a new name.

These two changes are intrinsically interconnected. Jacob’s new name, Israel, indicates a new approach to life. Israel is interpreted as “one who struggles with God and with man and has overcome.” Accompanied with this new name is a physical manifestation of this altercation. With a wound in his thigh, Jacob will walk with a limp for the rest of his life. The irony is that the man who was known for his quick escapes can no longer run.

Jacob is transformed literally overnight from someone prone towards running away to a man who can hold his own ground and will wrestle for his beliefs and values. Without the ability for a great escape, he now must confront his issues, family, neighbors and even God in a new way, face to face. Moreover, he now needs to consider how he will get around and lead a productive life.

With these two dramatic changes, our third Patriarch attains the gift of perspective, one that begets humility and compassion. These are his legacy to us.  While Jewish tradition commands us not to judge others until we have walked in their shoes, Jacob’s transformation encourages us to go one step further.

As the descendants of Jacob/Israel, it is incumbent upon us to take the time to see the “Tzelem Elohim”, the divine spark, in all those around us today. This perspective is intended to inspire us to heal the world by helping those in need, which entails ensuring that our homes, schools, synagogues and communities are accessible places where all can enter and feel comfortable.

Jacob’s journey teaches us that growth means not running away from our problems, but rather having the courage to wrestle and face them head on. Equally important, we learn that the cornerstones of inclusion, and every relationship for that matter, are empathy, humility, patience.

When Jacob becomes Israel he creates a birthright that is worth running after every day of our lives. May we have the courage to do so.

Rabbi Charles Savenor serves as the Director of Congregational Education at Park Avenue Synagogue. In addition to blogging on parenting and leadership, he is a volunteer fund raiser for lone soldiers in Israel.  A Boston Red Sox fan, he lives in New York with his wife and two sons.