Embracing Those With Disabilities 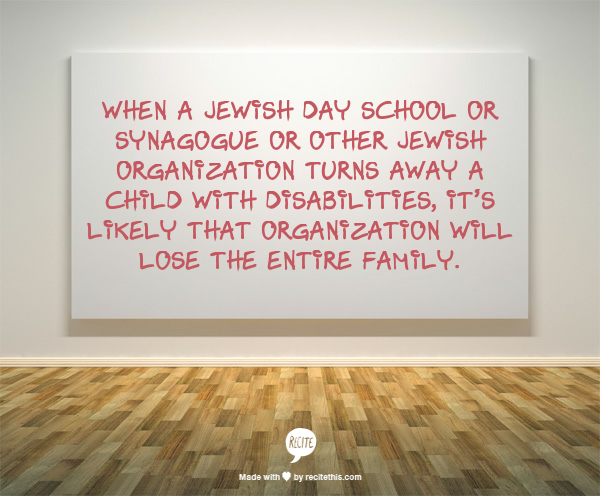 The Jewish community is 20 years behind the rest of American society when it comes to accommodation of people with disabilities, says a young advocate who was diagnosed with cerebral palsy when he was 11 months old.

“We’ve come around to the idea that (inclusiveness) is a fundamental right,” says Jason Lieberman, “but now we need to figure out how to implement it.” Lieberman, who was named to the sixth annual “36 Under 36” list by The Jewish Week newspaper earlier this year, cites the first Jewish communal program to accommodate those with disabilities – camping – as pivotal in his life. As a teen, he attended Camp Ramah in the Berkshires, where he felt included. Before the end of that summer, the camp had even built a ramp to the infirmary.

Physical accommodation for people with disabilities isn’t new to the Jewish world. Ethan Felson, vice president and general counsel of the Jewish Council for Public Affairs, recalls that when he worked in Connecticut during the 1990s, local congregation Temple Beth Israel became one of the first synagogues to design its bima to include a ramp. “I was very impressed,” he says.

According to Rabbi Jeff Glickman, rabbi of Temple Beth Israel in South Windsor, Ct., the congregation just “put its money where its values are.” Designed in 1999, the bima had previously only two stairs that had to be navigated to approach the bima. Putting in a ramp that needed a wide flat area at the top and bottom, with a slow incline, was challenging. The $16,000 construction cost was only part of the price the congregation was willing to pay: it also lost 40 seats in the sanctuary. Glickman admits that the ramp isn’t used much, but the “only asset that a congregation has is its values.”

When Felson was designing new office space for the JCPA in New York five years ago, he had Temple Beth Israel in mind. “We brought in a design consultant for offices and furniture to ensure that not only were all codes met, but we exceeded the codes for every work station. A person in a wheelchair could make it from the elevator to a desk, in case we should ever have an employee” reliant on a wheelchair, he says. “We wanted to make sure we did the right thing so that on day one, they’d have special access.”

Until about five years ago, the Union for Reform Judaism kept a list of congregations it certified for accessibility. “We primarily focused on worship, getting into the building, into the sanctuary, to the bima and to the bathroom,” says Rabbi Daniel Freedlander, URJ senior vice president. Synagogues would submit before and after photos, showing their plans and after verification of completion, they would receive a certificate, he explains.

“But since the recession, no synagogue has come forward to apply for the certification. There have not been a lot of facility improvements since 2008. When they undergo significant renovation, then they do it,” says Freedlander. “The ones that were going to do it, did it already.”

Now the URJ is heavily focused on awareness of the emotionally handicapped. “It was the physical plant, now the focus is on the spiritual and educational component,” he adds, calling it a transformation of the issue. “We’ve progressed from physical needs to special needs.”

According to Jennifer Laszlo Mizrahi, “only a small percentage of people with disabilities have physical disabilities. Usually they just need to be welcomed.” Mizrahi launched the nonprofit RespectAbilityUSA five months ago to focus on enabling people with disabilities to achieve the American dream. “There are two kinds of barriers, architectural and attitudinal, with the latter being more significant. One out of every five Americans has a disability,” she says, suggesting the percentage might be higher among Jews.

Mizrahi says the Jewish community has been slow to recognize the community of people with disabilities because “it’s very focused on success and education. Historically, education was the only thing you could take with you when you immigrated. Jewish survival has been based on intellectual ability. We as a community value Nobel Laureates, so in day schools we discriminate against those who don’t have the opportunity to win a Nobel.”

The problem is, she emphasizes, is that when a Jewish day school or synagogue or other Jewish organization turns away a child with disabilities, it’s likely that organization will lose the entire family. Mizrahi contends that this results in more unaffiliated Jewish families who become lost to the community. People with disabilities and their families then aren’t even included in polling samples when the Jewish community is surveyed about identity and other issues.

Mizrahi is hopeful, however. She notes that the Jewish Funders Network “has been vital in promoting this issue.” In fact, two years ago 16 funders in the JFN created a peer network for disabilities. Funders have been encouraged to include questions in applications for funding about whether the programs offer accessibility to those with disabilities.

In fact, Lieberman says the community of Jews with disabilities is beginning to be “recognized as being more of an asset than a drain on the community. We are thirsty to be wanted and appreciated and embraced. If we find a congregation that embraces us, we will go.