Don’t Judge a Book by its Cover – Parashat Toldot 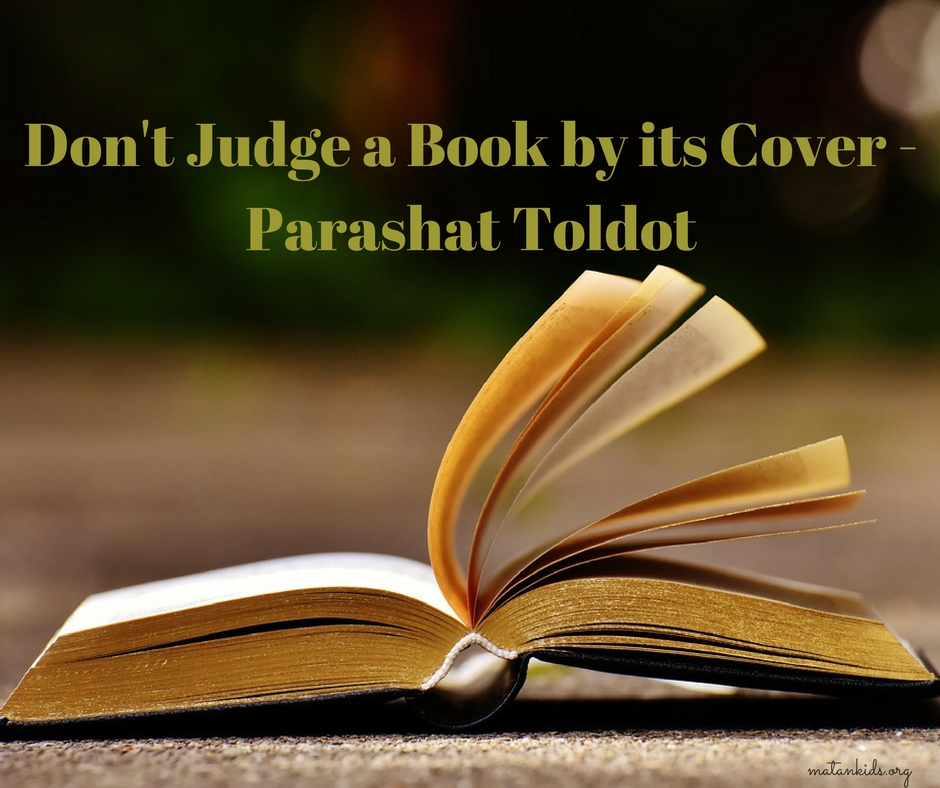 The great collection of rabbinic aphorisms known as Pirkei Avot – or Sayings of our Ancestors – includes this statement: “al tis-ta-kel ba-kankan e-lah be-mah she-yesh bo – don’t look at the jug but rather look at what’s inside.” (Avot 4:20) This saying has a lot to do with this week’s Torah portion as we are introduced to the twins, Jacob and Esau.

Our portion describes several scenes in the family life of Isaac and Rebecca and their twin sons. We are told of Rebecca’s pregnancy and the way the twins struggled inside of her. We are told of Esau’s tendency to prefer the outdoors and hunting and Jacob’s predilection for staying at home. We meet Esau and Jacob as Esau arrives home after a long day of hunting. Jacob is cooking a lentil stew and Esau asks for a bowl to satiate his hunger. Jacob gives it to him after Esau agrees to relinquish his rights as the first-born. The last scene in our portion around Isaac’s deathbed is the most poignant. While we learn that Isaac requests his favorite game dish from Esau and Esau leaves to hunt for it and prepare it, Jacob, under direction from his Mother, dresses up as Esau, brings his Father the meal and receives the blessing that was meant for Esau.

Though our story in the Torah presents Esau as an innocent bystander and Jacob as the schemer, we can’t help but read the Torah through the eyes of the rabbinic commentaries. We can all remember learning that Esau is the villain and Jacob is the righteous man. It is Jacob we reference when we pray 3 times a day and invoke his name along with Isaac and Abraham. The rabbis claim that Esau is an idol worshipper even in utero. Why did Rebecca feel the twins struggling? Because Esau wanted to get out and worship at the nearby pagan Temple (see Rashi’s comment on Gen. 25:22). The rabbis also assert that the Romans – the evil empire that persecuted the Jews in rabbinic times and destroyed the Temple – were descended from Esau.

I learned those rabbinic stories in my youth and repeat those stories as I teach this portion to my congregation every year, so it is often difficult to wade beneath the surface and see the actual details of the Torah portion. The rabbis’ perspective on the evil nature of Esau makes it difficult for me to see Esau for who he really is. Because the rabbis generalize the goodness of Jacob and the evil of Esau, generations of Jews have taken for granted that the rabbis are right. The rabbinic perception becomes the “truth” and we maintain their tradition by retelling these commentaries year after year.

We see how this plays out in society today. Stereotypes abound about segments of our society, especially toward people with disabilities. To this day I cringe when I recall how my Mother would be embarrassed by my brother’s behavior in public (he has an intellectual and developmental disability). She would try to hush him as she perceived the nasty looks from people bearing down on her. Preconceived notions about my brother and all those with disabilities prevent people from delving deeper and seeing the value and good that all human beings possess.

Rabbi Jonah Layman is the rabbi of Shaare Tefila Congregation in Olney, MD and is the Jewish Disability Liaison of the Rabbinical Assembly.