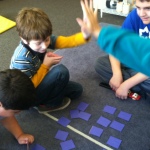 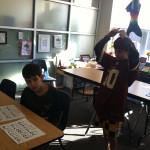 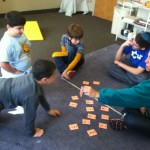 We all know that differentiated instruction is the key to addressing different students’ learning styles. And, if you’ve read anything we’ve written here, you’ve probably heard us say that special education is just really good education!

Educators – especially part-time religious school teachers – often worry about the extra time and money involved in differentiated instruction. So as I watched one of Matan’s classes this morning, witnessing differentiation at work, I took some pictures and some notes and thought I’d share how differentiation doesn’t have to take tons of extra time or money.

As you can see in the pictures, the class was divided into 3 groups. The children rotated between each group, and they were all geared towards learning Hebrew letters.

Group 1: Before class, the teacher photocopied pages of the full alef-bet. On the bottom of the page, she wrote each student’s name in Hebrew (one page per student). She then put a square around each letter on the alef-bet page that was part of the student’s name. Playing a combination of charades and alef-bet yoga, each child acted out the letters in their name for the other kids in the group to guess. Big hit!
(Have students at different levels? Alter this activity by having them write their own Hebrew name, or having them put a square around the letters in their name.)

Group 2: Again, each of their Hebrew names were written on pieces of paper. They were each given finger paint and paper and they worked on forming the letters that way. Of course, since different students have different tolerances for sensory materials, they were able to choose to use their fingers or paint brushes. So much fun!
(Have students who’d like a challenge? After they paint their name, have them paint Hebrew words that start with the same letter as their name, or ask them to paint pictures of those words.)

Group 3: A Hebrew letter memory game (with pictures that corresponded to the English letter sound) reinforced the letters found in their names. This gave the students an opportunity to sit on the floor rather than at a table, move around as much as they wanted, and have a visual, tactile, kinesthetic and auditory experience all in one. Who doesn’t love a game of memory?!
(Mixed levels in a group? Some kids can say the Hebrew letter, some can say the english letter corresponding to the picture, and others can make the sound that letter makes.)

If you have access to a printer and a copy machine, all of this differentiation cost about $7.00 – just the cost of the finger paint, paper and brushes (which we now have as part of the supplies for the year). As you can see, it was low-prep (the thing that took the longest was probably cutting the cards for the Memory game – but of course those can be used over and over) – and the kids were engaged, having fun, learning and having their needs met.

At Matan, it’s always a good day for differentiation!