This article originally ran in The Jewish Journal. We were so fortunate to have Jacob offer the keynote at our first Matan Institute for Education Directors and we are so proud of his accomplishment. Mazel tov, Jacob! 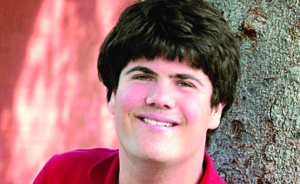 his coursework, participated in extracurricular activities and will be graduating this month, just like so many other high school seniors in America.

But Jacob is not an average student. He is an anomaly.

Artson has autism, but that did not prevent him from finishing high school; in fact, it pushed him. He has minimal verbal abilities and communicates by typing on an iPad. This method enabled Artson to do his schoolwork and earn a high school diploma from Emerson Academy in Studio City.

“It is exciting, and I am proud of myself,” Artson typed as his mother, Elana Artson, gently touched his elbow to prompt him to continue sharing his thoughts. “I loved [school] because it challenged me.”

Being treated like every other student, Artson said, made the social aspect of school one of his favorite parts. History quickly developed into his favorite subject, helping him explore “how we understand our environment and try to make the world a better place.” Martin Luther King Jr. became his focal point for grasping the world and his disabilities.

“As my mom reminds me, no one calls MLK a black activist; he was a civil rights leader because he had advocated for human dignity, and that is my goal as well. I may use my personal experience with autism as a base just as MLK used his personal experience as an African-American,” Artson said.

Artson has served as a keynote speaker at several conferences throughout the nation, promoting the message “that everyone has the right to be treated with dignity and respect.” With his iPad, he puts together presentations and a person of his choice speaks his words. At a conference for TASH, an association in support of people with disabilities, he also used MLK as the reference point for his message.  (Read more)