Ability and Disability Coexist; We Need To See Both

When God told Moses to lead the people out of Egypt, Moses was reluctant. He tried to refuse, saying “I have never been a man of words, either in times past or now that You have spoken to Your servant; I am slow of speech and slow of tongue.”

God replied, “Who gives man speech? Who makes him mute or deaf, seeing or blind? Is it not I?” In other words, “Moses, who do you think made you? I know who you are, and I chose you on purpose.”

When Moses nevertheless continued to try to refuse, God became angry. God pointed out that he had Aaron, and that Aaron would be able to speak Moses’ words when fluent speech was crucial.

God taught Moses that disability, ability and humanity coexist. Yet thousands of years later, we are still struggling to embrace this message. Many still say, “Look past the disability and see the ability!” or “Look past the disability and see the person!” That sounds positive, but it’s actually harmful to people with disabilities. We are disabled. We are people. We can do things that matter. All three of those things are important. All three of them are frequently overlooked. 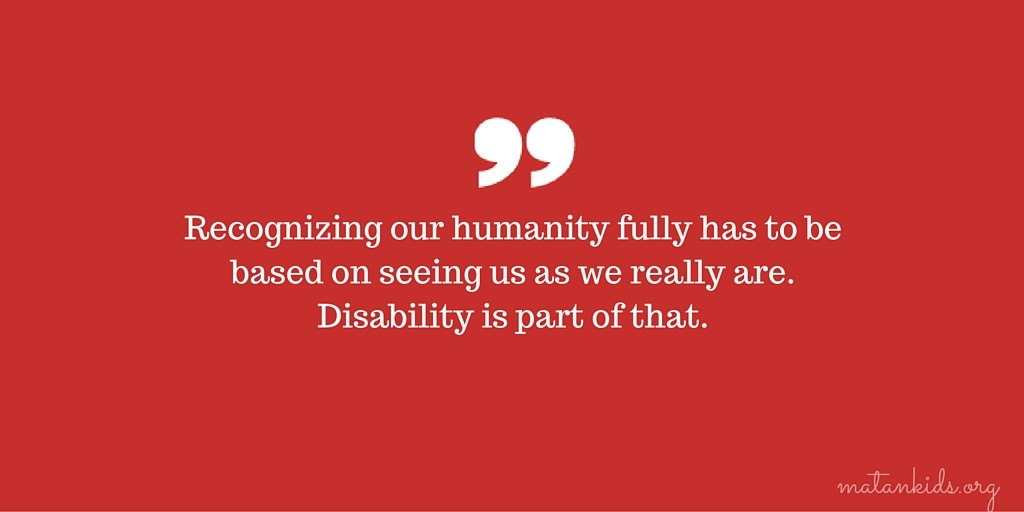 Sometimes people try to recognize our humanity by pretending that we are just like everybody else. That doesn’t work, because we are actually different. Recognizing our humanity fully has to be based on seeing us as we really are. Disability is part of that.

And yet, when some people see disability, that can be all they see. Sometimes they see us as nothing more than our conditions. They see our need for therapy and treatment; they don’t see our abilities and interests. People need more than therapy. People need to be recognized as full human beings and supported in doing things that matter. We need our abilities to be taken seriously.

Sometimes ability is taken seriously by ignoring disability. People say things like, “The only disability in life is a bad attitude!” and “You can do anything if you put your mind to it and keep trying!” and “ 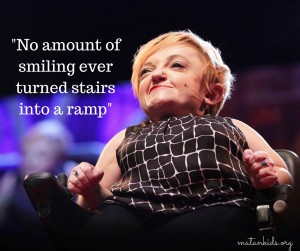 There’s no such thing as can’t.” This also sounds positive, but it isn’t. Disability exists, and it does sometimes mean that certain things are physically impossible no matter how hard we try. As Stella Young said, “no amount of smiling ever turned stairs into a ramp.”

Children with disabilities need support in learning to take their disability into account when they make choices about where to put their effort. Sometimes trying hard makes things possible; sometimes it doesn’t. Disability means that sometimes we need to do things differently, and other times we need to do different things. “You can do anything if you put your mind to it,” isn’t helpful; it’s much better to say, “You can do things that matter and I will help you figure out how.”

We still need caution, because when people recognize that disability is important, they come to view ability as unimportant. This also causes serious problems. For instance, children with communication disabilities are often forced to repeat a preschool curriculum over and over, even well into adulthood. People who would benefit from high-tech communication devices go without them because others don’t realize that they have more to say than “thank you,” “snack,” and “bathroom.”

Most distressing is when disabled people are treated as though the only thing they have to offer is the opportunity for others to learn compassion by selflessly caring for them. While some call this seeing the image of God; it’s actually a hillul hashem (an act that is regarded as an offense to God). People with disabilities have abilities that matter and they have contributions to make. An inclusive attitude takes abilities and contributions seriously.

We can only include real people. Some people have disabilities; including them means that we have to be able to acknowledge disability as a basic fact of life. Ability and disability coexist; we need to see both. God taught Moses the meaning of inclusion thousands of years ago. Today, we are learning how to put it into practice. 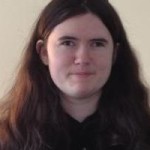 Ruti Regan is Matan’s first Rabbinic intern. A 4th year Rabbinical student at the Jewish Theological Seminary and a long-time disability advocate Ruti will contribute her own teachings via the Matan blog, webinars, Matan Institutes and new curricular projects.