A Path to Inclusion 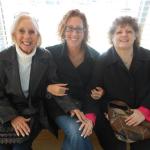 Gena with her mother and grandmother.
Courtesy of Gena Rosenzweig

Gena Rosenzweig is a special education teacher by trade, working for the past 4 years in the area of Inclusion in the Jewish supplemental schools.  She currently lives in the Atlanta, GA area.

Growing up a child of Deaf adults in Lakewood, New Jersey, I was introduced to worlds of silence and noise.  My family, to ensure that I had plenty of auditory input, enrolled me in school at a very young age, starting my education at a Greek Orthodox Church preschool.  It wasn’t until I was 4 that I went to Lakewood Hebrew Day School (LHDS), which, ironically, was the same school my mom was kicked out of because the other mothers didn’t want their children “to catch the deafness”.

My family members were all Jewish but my aunt had converted from Roman Catholicism so we celebrated Rosh Hashanah, Passover (where I got an Easter Basket), Thanksgiving and Christmas. We had an electric menorah for Chanukah, but these were our four major holiday celebrations.  My only connection to the Jewish world was the fact that I went to school at an Orthodox Hebrew school.  I went to our family shul, but just to hang out with my friends, and had a Bat Mitzvah party because that was the cool thing to do.   My family was never truly connected to Judaism. It wasn’t until I was older and had a conversation with my mom and grandmother that I realized why.

“Why would I go somewhere that I don’t understand the language and they won’t provide an interpreter?”  This was my mom’s response, and it made perfect sense.   Our community wasn’t very welcoming so why should my parents bother?  My grandmother had her own set of reasons. When both her children were born with disabilities (my mom and uncle both have Usher’s Syndrome and my uncle was also diagnosed with mental retardation), she and my grandfather sought guidance from the head Rabbi in New York.   His response:  “Your children are this way because you are not Shomer Shabbos (observant of the Sabbath laws).” This began my grandparents’ long journey of “religion-hopping” and it wasn’t until I came along and entered LHDS that they started moving back towards the Jewish world.  But it was a very slow move.

My own connection to Judaism didn’t really happen until I was in college.  I did a work study stint at Hillel, then worked at the JCC , met some amazing people and eventually joined the staff at Temple Judea in Coral Gables, FL.   Over the years, I became more and more connected to my religion and culture through the people I met along the way. When I joined the religious school staff at Temple Judea, I was working as a secular special education teacher. The Education Director at Temple Judea recognized the need for inclusion within the religious school, and I was proud to help make that happen. As I think about my mom I can’t imagine a better, or more important, path for me.

I now live in Atlanta and am the Jewish Supplementary Educational Inclusion Coordinator at Jewish Federation of Greater Atlanta. Here, I can help make sure that all children with special needs and their families can form meaningful connections to their Jewish roots in a welcoming environment. After all, our collective Jewish future depends on it.